Culinary Smackdown – Cindie's Part of Our Entry for Battle: Oktoberfest 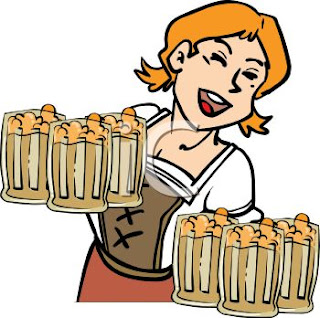 It’s that time again. Stephie of Small Girl Adventures was chosen as the winner of the August Smackdown winner by last month's host, Grumpy Granny (GG was otherwise occupied this month, traveling from Colorado to San Francisco from her epic swim around Alcatraz!). For this month’s contest, Stephie elected Oktoberfest as our theme. She’s already up with her post here, so head on over and check the comments for links to what the other participants came up with this month.

As for Cindie and me, after last week blew up on both of us, we ended up modifying our original plan to make sauerbraten (basically, German pot roast marinated in vinegar and red wine), one of my favorite German dishes. There’s nothing difficult about throwing beef into the marinade, then braising it 3 to 7 days later (the longer in the marinade the better, I say). But I didn’t get to the store early enough last week to make that happen, so we switched our entrée to sausages and kraut and forged ahead with the sides we had originally planned. Every time we’ve cooked together this summer we’ve tried to adhere to the KISS (Keep It Simple, Stupid) principle. This time we think we finally achieved it. And I managed to remember to take some step-by-step photos along the way. So let’s roll.

This side was Cindie's baby, and she approached it the same way I often tackle recipes I haven’t made before. She googled several variations, then combined what she liked about each into her own version, which I had the foresight to ask her to write down while she was prepping. (It's always harder to remember after the fact, especially with a full belly.) I’m doing my best to read her handwriting as I transcribe here. 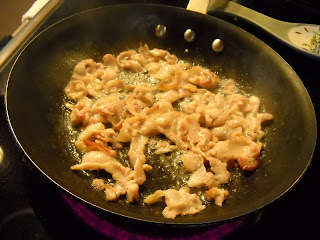 Keep the the bacon grease. 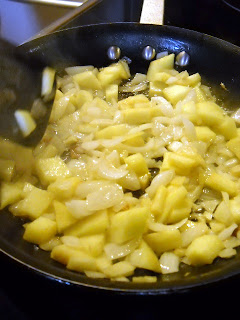 Add these to the warm bacon grease and saute until translucent. Season with salt, pepper, celery seed, and whatever else you choose. Caraway seed would be good, but Cindie's not a fan. We also declined to go the cinnamon-nutmeg-brown sugar route. We like our slaw vinegary. 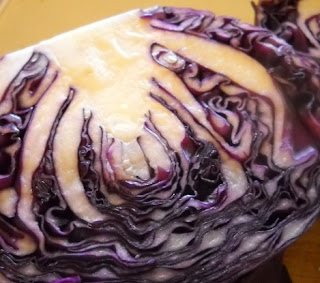 (You might want to beware of small cabbages. Cindie came to the conclusion later that the ones she'd purchased were old, with the outer layers removed, making them look smaller.) 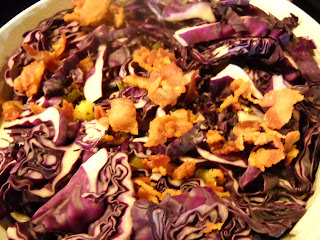 Place melted butter and olive oil in the bottom of a casserole dish, then add alternating layers of raw sliced cabbage and the sauteed onion, apple, garlic mixture, ending up with top layer of cabbage. Add the crisp bacon.

Vinegar - oops, Cindie forgot to note how much she used. She used white wine vinegar because that was what she had on hand. I'd say cider or red wine vinegar would work just fine too. 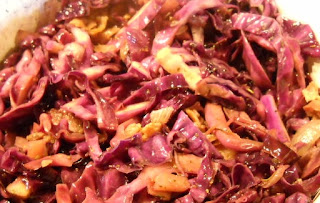 Place the casserole in a 350 degree oven for at least an hour, turning twice.

Cindie wanted her hot slaw to retain some cabbagey crunch rather than braising it for several hours. An hour at 300 didn't get the raw cabbage cooked, so she bumped up the temp and cooked it some more. Eventually she had to add some more liquid - beer and hard cider worked great.

This is dead simple, especially if you have good sausages and fresh sauerkraut to work with. Neither of us can resist the great sausages from Cincinnati sausage artisans like Kroeger's and Eckerlin's at Findlay Market or Avril-Bleh's on Court Street. Turns out Cindie had overbought, and frozen, an interesting array from our food forays over the summer, and this was a perfect time to use them. I headed to Avril's on my lunch hour last Friday for a couple pounds of their fresh kraut (Cindie's favorite). And I couldn't resist adding one of my own faves, smoked seafood brats from Lobsta Bakes of Maine, in Newtown (more about them in an upcoming post). 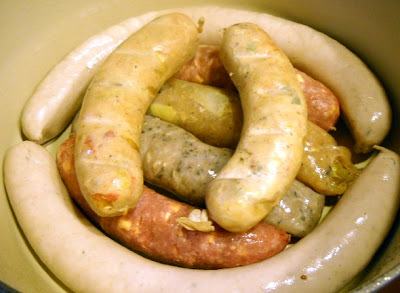 We had so many different kinds that we piled them into a Dutch oven (sprayed first with vegetable spray - Cindie always does that). 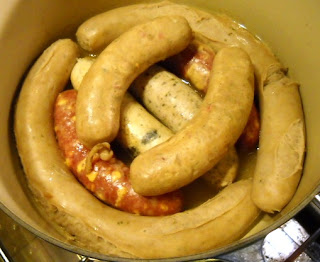 Put them in a 350-degree oven, uncovered, until the brats (yep, those are those giant ones from Eckerlin's) start to puff up and split. 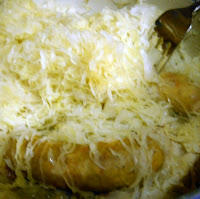 Dump the sauerkraut and some beer on top of the sausages and continue to bake until the kraut is warmed through.

ETA: Here's my part of our entry for Battle: Oktoberfest - potato pancakes!
Posted by Sharon Rudd at 10:27 PM

You know I'm interested in how the sea dog tasted cooked in sauerkraut!