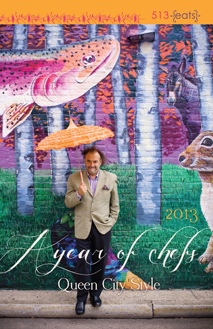 photo©Gina Weathersby/Kiwi Street Studios 2012
After Black Friday and Cyber Monday, here’s something I can get behind: Giving Tuesday, which celebrates and encourages charitable activities that support nonprofit organizations.

The volunteering bug bit me this year, and I’m glad it did. I confess my first foray was not entirely altruistic. When I signed up to be a table leader for Dîner en Blanc, it was partly in the hope my volunteer efforts would secure me a seat. (They did, and what a night it was!) Then Edible Ohio Valley posted a call for volunteers for the Ohio Valley Greenmarket and I thought, why not contribute a couple of hours to an event I already planned to attend? Another call for volunteers went out for Eat.Play.Give (formerly 7 Days for SIDS). Yep, I donated an afternoon of my time to that too. Through these experiences I’ve met some terrific people I might not have crossed paths with otherwise. And sometimes I’ve been lucky enough to cross paths with them again.

My baby steps in volunteering have yielded a few lessons. 1) There is truth to the adage that you get more of out volunteering than you give. 2) The organizers behind events like these put in a lot of hard work and can always use extra hands. 3) Food people really give back.

Take Eat.Play.Give, the annual fundraiser for the de Cavel Family SIDS Foundation, which supports SIDS research, education, and outreach and provides scholarships to the Midwest Culinary Institute in honor of Tatiana de Cavel, the daughter chef Jean-Robert de Cavel and his wife Annette lost to SIDS. The roster of chefs who participate each year is a pretty much a Who’s Who of Cincinnati talent, and they all bring their A game to collectively create the best brunch in town to support this cause.

“Food people” aren’t limited to chefs. For instance, two women I am proud to call friends, photographer Gina Weathersby and food writer Ilene Ross, the talented duo behind online magazine 513{eats}, created the stunning calendar whose cover is at the top of this post as their contribution to Eat.Play.Give. All proceeds go to the de Cavel Foundation, and you can still order yours – for yourself or for holiday gifts. Click on over to the 513{eats} site for a month-by-month glimpse of the local chefs paired with their spectacular dishes and place your order. I received my glorious large-format calendar in the mail last week, and I won't want to part with it even when 2014 rolls in. I'll be keeping the link on my sidebar so you can find the 513{eats} calendar - and purchase it - throughout the holiday season. 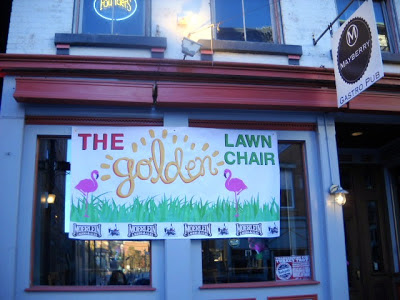 For those of you following along about the Golden Lawnchair benefit, we netted more than $3,300 for the Freestore Foodbank! I was happy to pitch in behind the scenes for a fun and creative evening masterminded by bloggers Laura and David Arnold of Cincinnati Nomerati. Josh Campbell and crew at Mayberry had a blast taking Laura's original menu up to 11. Stay tuned for the truffle tater tots or pimento-cheese slathered cheesesteaks to possibly pop back up on the Mayberry menu. And for great photos, check out blogger/documentarian Bob Schwartz's post about the event. The Golden Lawnchair received generous donations from more local restaurants, food trucks, and farmers than I can name, proving once again that food people really give back. Thanks to all!

Whether it's today or in the future, you can make a donation to something you believe in or find your inner volunteer, too. Consider it.

Bloggers can be a wacky bunch. A wacky bunch with big hearts. Like my online pal from Seattle who once hosted a virtual New Year’s Eve party. From across the country, and beyond, a group of us conjured up decorations, games, and sundry contributions on our blogs (the host’s animated .gif of a virtual vodka fountain was one my favorites). We whiled away the evening visiting each other’s “party rooms,” cracking jokes, exchanging comments, and generally having a lot more fun than I’ve ever had at a real-life New Year’s Eve party. Better yet, we each came up with a scheme for welcoming the upcoming year on a karmically good note by making a donation to a local charity. Like many of my friends, I pledged a certain amount of money per comment left on my blog that weekend. My contribution, a virtual morning-after brunch, racked up so many comments that I made a tidy (for me) donation to the Cincinnati Freestore Foodbank, a tradition I now look forward to greeting each new year with.

Food bloggers Laura and David Arnold of Cincinnati Nomerati are flipping things around. When her husband David’s former job took him out of town once a month, Laura took advantage of the quiet time by focusing her culinary imagination and considerable artistic talents on preparing themed welcome-home dinners. Laura served up her most recent – with a “trashy to classy” menu featuring dishes like deviled quail eggs, truffled tater tots, and quite possibly the fanciest Philly cheesesteaks ON EARTH – at a “restaurant of the mind” she dubbed The Golden Lawnchair, complete with pink flamingo party favors. Go check out her post about it. I'll wait. 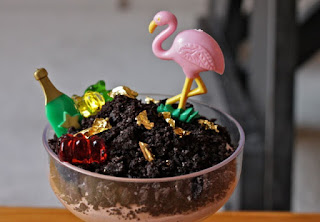 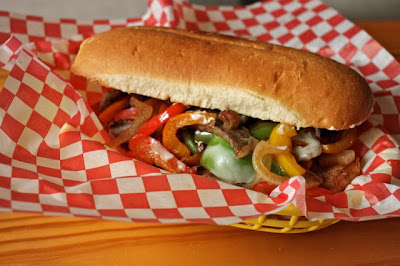 Photo by Cincinnati Nomerati
After drooling over the photos, as well as the menu, Nomerati readers couldn’t help but exclaim they’d like to eat at The Golden Lawnchair too. With the help of chef/owner Josh Campbell, who is turning over his OTR restaurant Mayberry to the effort, The Golden Lawnchair will become a reality next Sunday night, Nov. 18.

If you thought simply bringing this fantasy to life would be enough for Laura, you’d be wrong. She decided to turn the event into a benefit for the Freestore Foodbank and has been going full throttle to make this one of the most enticing benefits the city has ever seen. Especially for those of us who aren’t in a position to fork over several hundred bucks for a ticket to a gala, and wouldn’t want to dress up in tuxes and gowns if we could.

So how can you get in on this, and what can you look forward to? I’m pitching in behind the scenes and can share these details.

Although the first 48 pairs of dinner tickets (which include After Party admission) sold out in less than 48 hours on the Golden Lawnchair Indiegogo site, there is one last pair being auctioned off here on Ebay! The auction will run until the night before the event.

Miss out on the dinner portion of the evening? No worries. The After Party runs 9:00-? and cover is just $15/person. Weather permitting, there will be a band (or two). And plenty of prizes available.

Oh, the prizes! This is really going to be a “Locals Supporting Locals” event. We’ve received generous and creative contributions, from farmers to food trucks to fine dining establishments, as well as many of the arts organizations and other civic institutions that make Cincinnati great. Available via raffle ($5/ticket), bingo, or silent auction as the evening unfolds, you can come away with gift certificates, one-of-a-kind experiences, and gift baskets from some of Cincy’s best.

A few special perks have already been claimed on the Golden Lawnchair website, including the Nicola’s Limoncello lesson (the lucky winner gets to take a batch home with them) and the fabulous License to Chill package from Dojo Gelato – the winner will work with Dojo founder Michael Christner to create and name their very own gelato flavor, as well as receiving two pans of their custom gelato to take home. If you weren’t the lucky person to claim that perk, Dojo will be featuring the special flavor for a week at their Findlay Market shop. Stop in for a taste, because Dojo will be donating all proceeds to the Freestore Foodbank!

Still up for grabs on the website (as of this writing) are a private pizza lesson for two from A Tavola. 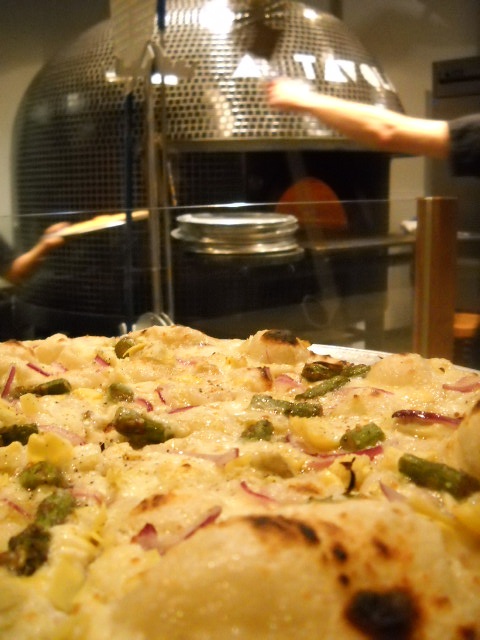 And a private cocktail lesson by the Cincinnati’s reigning mixology maven, Molly Wellman, of Japp's; Old Kentucky Bourbon Bar, and a cocktail cookbook coming in 2013. 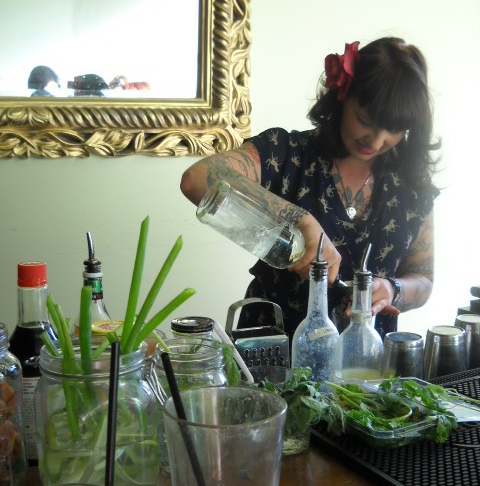 What else is in store?

But wait, there's more. Gift cards and passes from:

And still more, including a bike to be raffled off at the After Party!

Head on over to Ebay now to bid on that last pair of dinner tickets, or make plans to attend the 9:00 p.m. After Party next Sunday night at Mayberry, because you don't want to just imagine what this night will be like. You'll want to be there!

Spread the word and support the Freestore Foodbank! 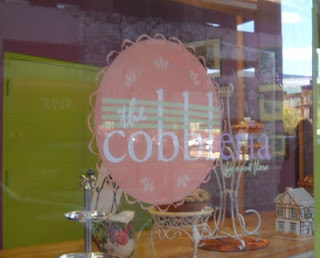 Once upon a time West 4th Street was Downtown Cincy’s thriving gallery district. Then came the Over-the-Rhine resurgence and the Pendleton Art Center, luring artists uptown. Local 127 moved around the corner to its current Vine Street location, and it’s gotten pretty quiet on West 4th. But you may want you to check out the area again, thanks to twin storefronts operated by Aunt Flora and a new wine store, Everything’s D’ Vine. 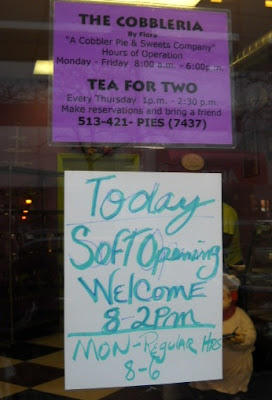 Aunt Flora, aka Katrina Mincy, at one time had a place at Findlay Market, then a restaurant in Silverton. She’s brushed elbows with Martha Stewart and Oprah. On Friday I heard she was doing a soft opening of her newest venture, The Cobbleria, and checked it out at lunch. 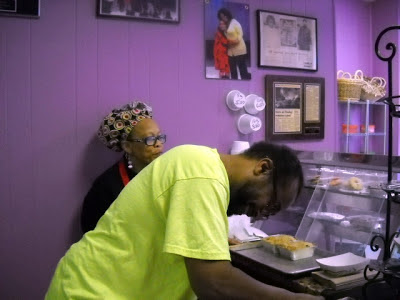 Samples of fresh-from-the-oven blackberry and peach cobblers were on offer as Aunt Flora greeted customers. I couldn’t resist buying one of each. The colorful and inviting space at 213 West 4th (that’s the block where the Scientology offices and furniture store Contemporary Galleries used to be) serves up cobblers, tarts, and a case full of sweet deliciousness. Aunt Flora plans to add more Southern treats like sweet potato pie and red velvet cake. 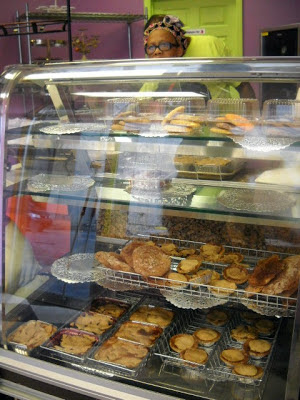 Not open quite yet next door will be another take-out business called What’s in the Skillet, featuring a few soul food specialties on the savory side. 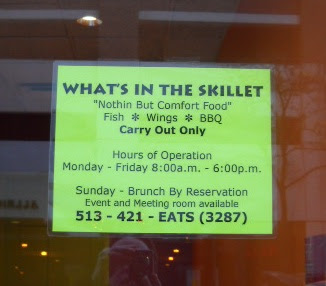 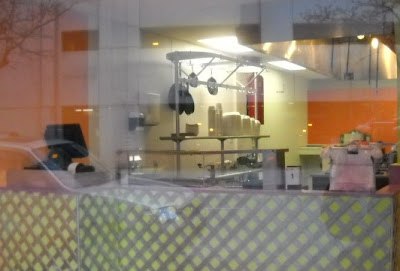 Aunt Flora tells me she plans to offer cooking classes and has an activity room in the back that can be reserved for special events. From the looks of the signage, it appears brunch and tea may be available in that space, too.

About those cobblers. The Cobbleria serves savory versions as well as fruit cobblers, and I picked up a veggie cobbler for my Friday lunch. “Some people might call them potpies, but we’re calling them savory cobblers,” joked the gentleman behind the counter with Aunt Flora. My veggie cobbler was no laughing matter – serious comfort food perfect for a fall day. 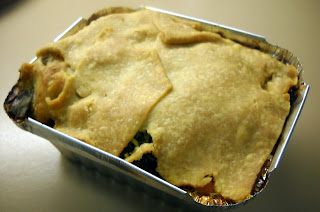 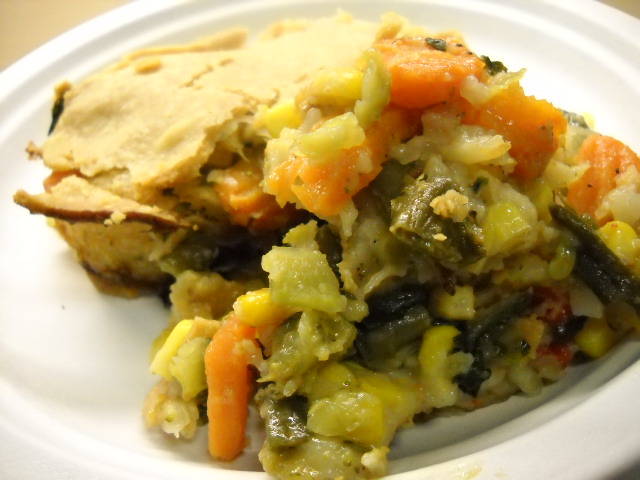 I haven’t had a chance yet to check out Everything’s D’ Vine, a new neighborhood wine shop at 320 West 4th (in the next block west from Aunt Flora’s), but they soft-opened last week too and have their Grand Opening scheduled for Friday. Nov. 4. Stay tuned to their facebook page for more info, and check them out.
Posted by Sharon Rudd at 8:38 PM 3 comments: