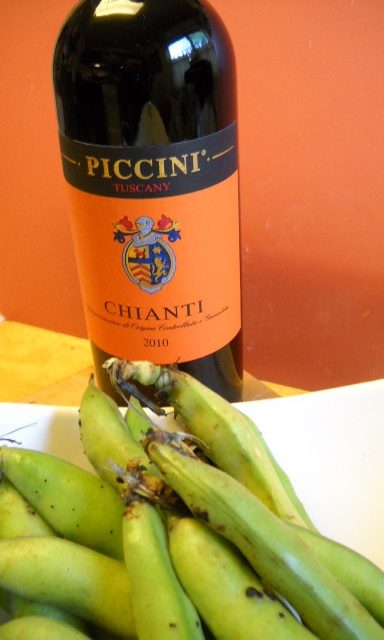 Our March Culinary Smackdown winner, Katie from Taste & See Cincinnati, challenged us to Battle "Literary" Food this month, leaving plenty of wiggle room for our entries to be inspired by fiction, memoirs, or any non-cookbooks. See what Katie's come up with for this battle here, and check the comments section for links to the other fine entries.

Before I'd managed to zero in a book, I stumbled across some fresh favas at Madison's in Findlay Market, and an idea was born. I snatched some up, eager to play around with a spring ingredient I've never worked with before, and picked up a bottle of Chianti on my way home. Neither would have gone to waste, but I was glad to confirm my recollection that the movie The Silence of the Lambs was based on a book, by Thomas Harris. I confess I've never read the book, and was probably one of the last people in America to see the movie, afraid it would creep me out.

I promise you there is nothing creepy about this dinner I made last night. It is most assuredly free of liver (of a census taker or any other critter) and is instead a celebration of spring produce. My fava beans and a nice Chianti had a splendid supporting cast, including ramps, morels, and fiddlehead ferns, also from Madison's. 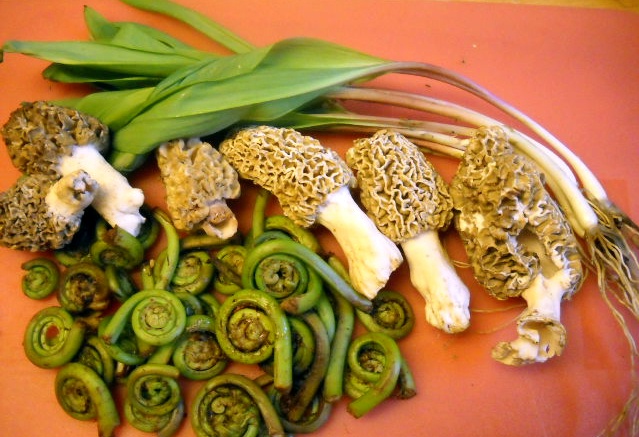 I'd never cooked with any of them before. So step one was to read up on the basics of preparing fresh favas and fiddleheads. I came across a couple of different ways of extricating the fava beans. 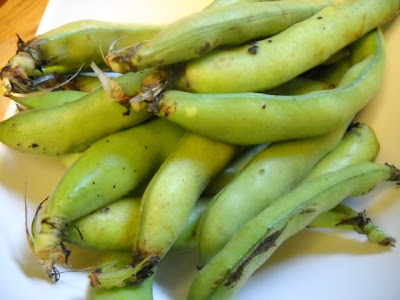 First, you "unzip" the pod to get at the favas, which are similar to lima beans. 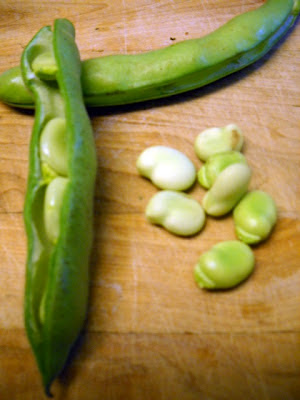 But your prep work is far from done at that juncture. Next you have to get the beans themselves out of their "waxy" outer casing. Some people peel away the casing. I decided to go with a method where you dunk the beans in boiling salted water for 30 seconds, drain and shock them in cold water, and then try to "slip" them out of the casings. 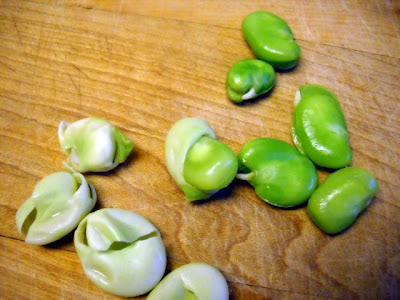 The blanch-first method worked pretty well for me. To open the casings I just used my fingernails (which I wished I hadn't cut the night before). Alas, I did not always manage to slip the beans out whole. These are delicate little things that easily split in half. Still, it remained a time-consuming process to free all the favas. English peas, which I was also using, are lot less work, even though they and their pods are much smaller. Here's a comparison shot (with not-yet-freed favas). 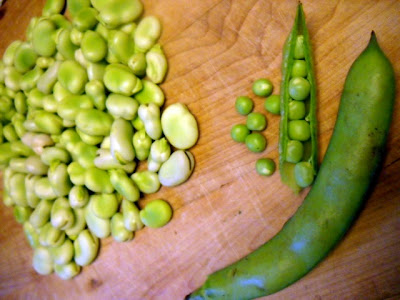 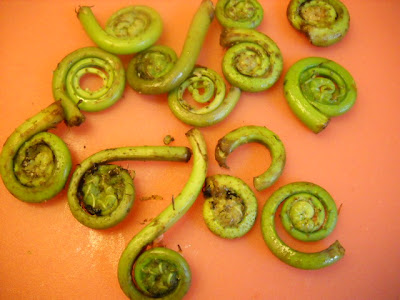 I found this handy primer on how to prep fiddleheads, but mine had no chaff to speak of or unfurled ends longer than 2 inches, so I washed them, patted them dry with paper towel, and figured I was good to go. The most important tip I came across was to make sure not to cook them more than 3-4 minutes. I'm not sure how old mine were, but I cooked them less than that and some of them were a bit bitter.

Ramps, sometimes called wild leeks, look a lot like tiny scallions and give off a pungent garlicky onion flavor. There are two good reasons to use them soon after you find them: 1) they are delicate and will taste better and 2) you will be able to smell them not only in the refrigerator but also outside the refrigerator if you try to store them for a while. I used three, slicing the white portion near the bulb thinly.

I figured it couldn't hurt to use the ramp leaves too, along with the leaves from some lovely radishes I'd found at Northside Farmers Market. 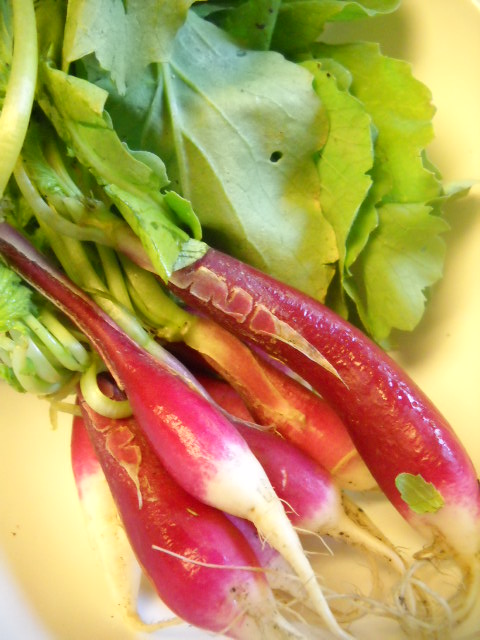 I sliced the accompanying radishes, shucked some peas, made thick slices out of the morels, cut some asparagus, stripped some fresh thyme, and ended up with a whole lot to cook with. 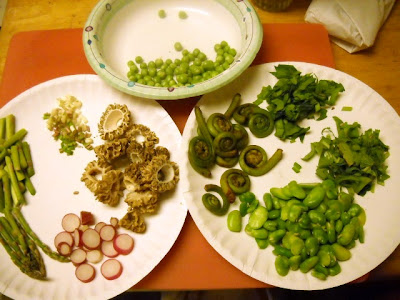 I had in mind my own personal pasta primavera, so I cooked off some whole wheat penne and set forth to cook – but not overcook – my bounty of tender young spring produce. I started with one non-herbivore ingredient, a single slice of lamb bacon. I swear I wasn't even thinking about the tie-in to the title of this book/movie when I purchased it, at the new Dutch's Larder in Hyde Park. (Their grand opening is this Friday, featuring Belgian style beers from Rockmill Brewery in Lancaster, Ohio, and the lamb bacon in question is just one of the items they offer from Smoking Goose Meatery in Indianapolis, whose products are also available at Jungle Jim's and served at Enoteca Emilia in O'Bryonville.)

So I rendered (and removed) the bacon with a sprig of fresh thyme, added some butter to the drippings, and started gently cooking my unfamiliar veg in the order I guessed would be best to get them done, but not overdone. I overdid the "braised" radishes, and would probably have been better off not slicing them. Sometimes you just have to figure things out on the fly, and that's what I did, removing what seemed ready when I still had other veggies to add to the skillet.

A splash of sherry vinegar, some salt and pepper, a drizzle of Chianti, and another dab of butter or two all went in at some point as well (upon reflection, some lemon zest or juice would have been worthy additions). Finally, I added the penne to the pan, along with all its assorted partners, swirled in some pasta water, pronounced my dinner done, and was glad for a glass of Chianti. 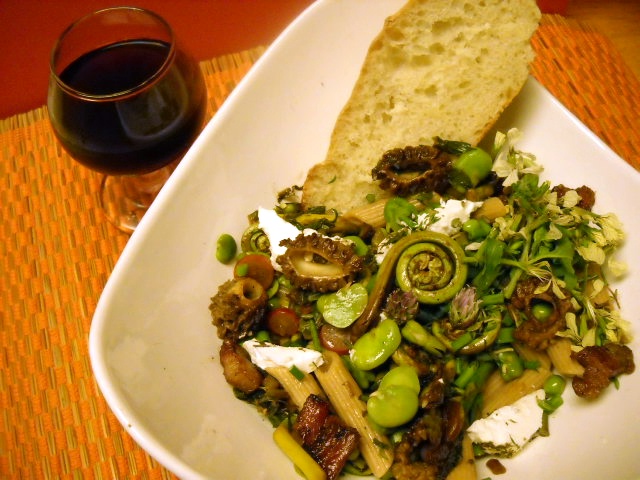 Into a bowl it went, dolloped with some herbed goat cheese. And one of the best accompaniments any spring dinner could have: a slice of homemade ciabatta courtesy of Jeff of A Dork and His Pork, who has previously graced our Culinary Smackdown. Jeff brought smiles to many Cincy friends and bloggers Sunday morning by playing bread baking angel, and I'm honored he included me. Let's just say that if he ever opens "Sticky" I will be first in line.

Wishing you all a bountiful spring, and courage to try cooking (or tasting) ingredients and dishes that are new to you. Seize the season. And if you're lucky enough to have a generous angel of the baking or farmer ilk in your midst, say Yes!
Posted by Sharon Rudd at 11:53 PM 8 comments: 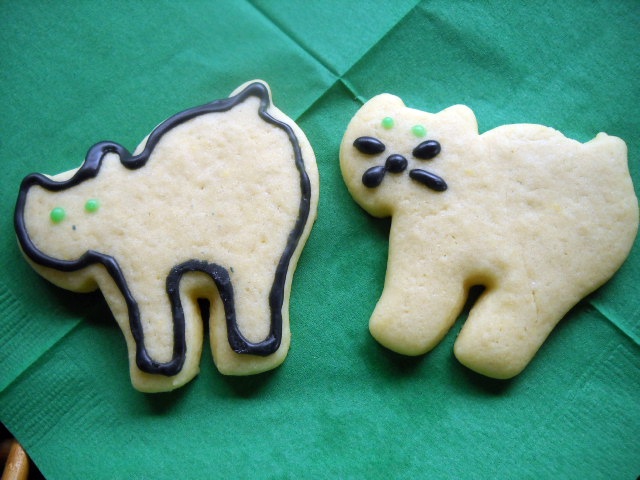 Today was a lucky day indeed for me, thanks to the talented Stephie Boertlein. In addition to being a friend, food blogger (at Small Girl Adventures), and frequent participant in the Culinary Smackdown, Stephie has launched her own catering business, Small Girl Delights. My office does a round-robin Friday morning Breakfast Club. So as my turn approached, I enlisted Stephie to provide today's treats. I should have snapped some photos before my co-workers devoured the spread she put on for us – because devour they did! Here are a few highlights. 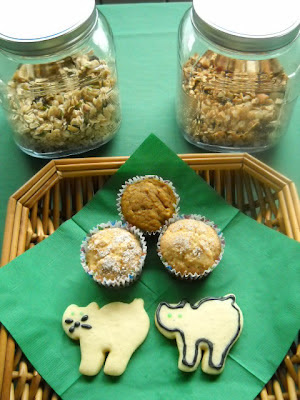 In addition to her signature sugar cookies, always delicious and beautifully decorated (she also made some chocolate black cat cookies in honor of the day, which were gone in short order), Stephie provided spiced pumpkin and crumb cake muffins. She also had the brilliant idea of doing a "granola bar," with a gorgeous fruit plate of blackberries, raspberries, strawberries, grapes, and orange slices plus Greek yogurt and not one but two varieties of homemade granola. 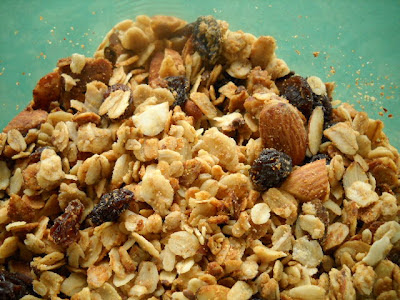 I received many compliments and thanks from my colleagues. I even got an email from a co-worker who doesn't participate in Breakfast Club but sits near the kitchenette where Stephie's breakfast treats were laid out. She told me she heard so many oohs and ahs that she had to check it out, and was most impressed. I encouraged her to sneak a taste:)

I hope your Friday the 13th has treated you as well as mine has. And if you're in search of a caterer in the Cincinnati area, I strongly recommend Small Girl Delights!
Posted by Sharon Rudd at 7:26 PM No comments: 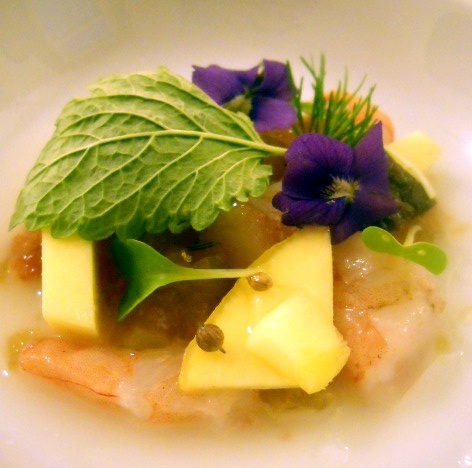 I've been traveling, eating, working and, alas, not blogging in a while. But all is well, especially after a phenomenal meal tonight at Arts and Lettuce, the monthly underground dinner series prepared by the talented Ryan Santos of Please Catering. It was springtime on a plate through many surprising and delightful courses, and I'll be back with a full report, along with tales of my travels to Tennessee, and more.

Meanwhile, our gracious host of the March Culinary Smackdown – Battle: Spherical Food – Leah, of Eat, Drink and Be Married, recaps the "Battle Balls" entries here. Congrats to Katie of Taste and See Cincy for her win with some insanely tempting popcorn balls and one of the funniest entries in Smackdown history. As last month's winner, Katie becomes host, judge, and theme-picker for the April Smackdown, and this one is mighty intriguing. Check out her announcement post for all the details on Battle: Literary Food here. All are welcome to join in this friendly little monthly cooking/blogging contest.In fact, our most recent winners have been newcomers :) 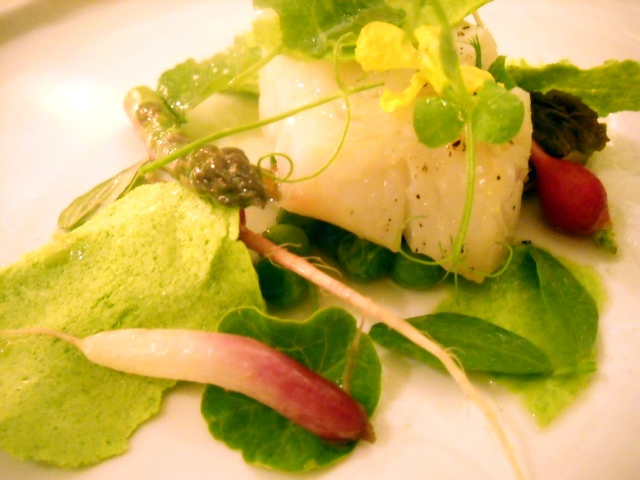 Hope you are seizing the delights of Spring wherever you are, and sharing a table with friends, family, or, as I did tonight, an intriguing group of people you are meeting for the first time.