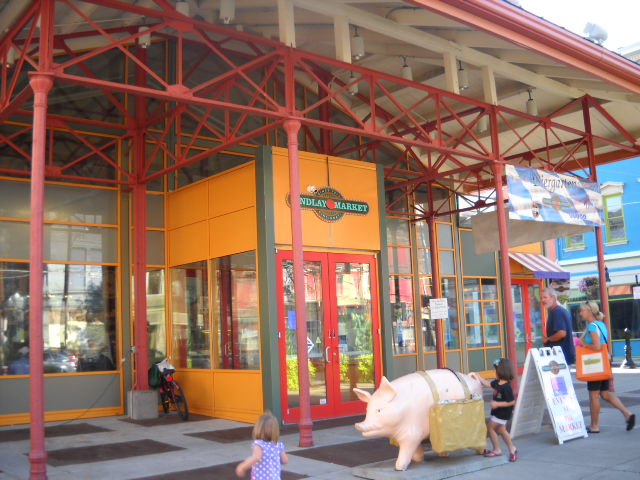 While all too many on the East Coast were contending with Irene's ill effects, she kept a high-pressure system in place over Cincy this weekend, with blue skies, comfortable temps, low humidity, and pleasant breezes.

Cindie and I couldn't have asked for a more lovely morning when we headed to Findlay Market yesterday to pick up ingredients for this month's Culinary Smackdown: Battle Bacon, hosted by Grumpy Granny. For my out-of-town readers, one of Cincinnati's nicknames is Porkoplis, stemming from my city's deep German heritage. We know how to embrace our nickname and have fun with it. The Cincnnati marathon is called the Flying Pig, and a few years ago, the Big Pig Gig had artfully decorated fiberglass pigs like the one in the photo above popping up all over town.

We made a point of arriving early so I could pick up some Blue Oven bread before they sold out. I took my place in the Blue Oven line while Cindie headed inside the Market House to the always-busy Gibbs to stock up on requests from her husband and father. 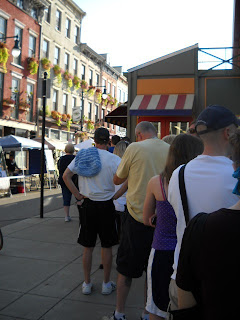 I was rewarded for my efforts with this hearty loaf of Blue Oven's Tortano, made with wheat flour and potato, plus some of Blue Oven's legendary English muffins, now safely stowed in the freezer for next weekend. 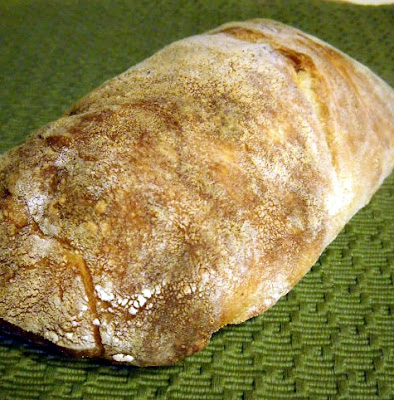 The Market Shed was abuzz with customers and offerings like these from LeGrand Vegetables. 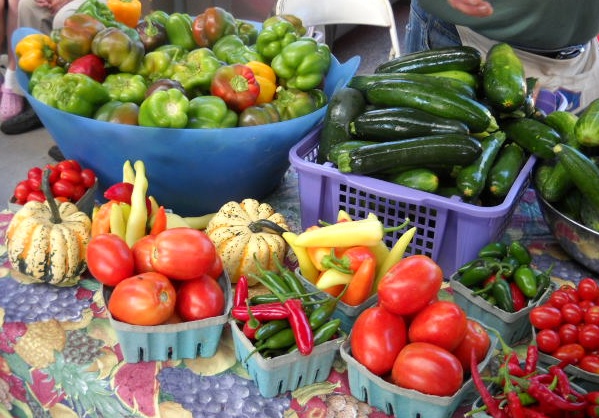 Cindie and I never make a trip to Findlay Market without a stop at Fresh Table, at the east end of the Market House (just inside from Daisy Mae's, which also offers downtown delivery and a Quick Pick Produce option, where you can order ahead, then drive up for curbside delivery).

Fresh Table's prepared foods always taste as good as they look, and most are made with ingredients sourced from other Findlay Market vendors, including Daisy Mae's. 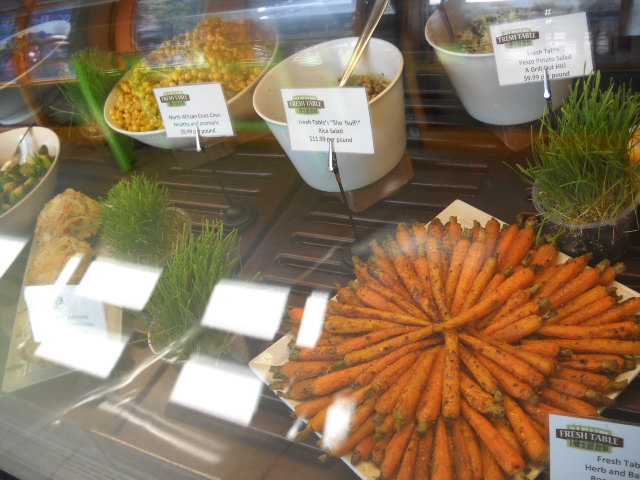 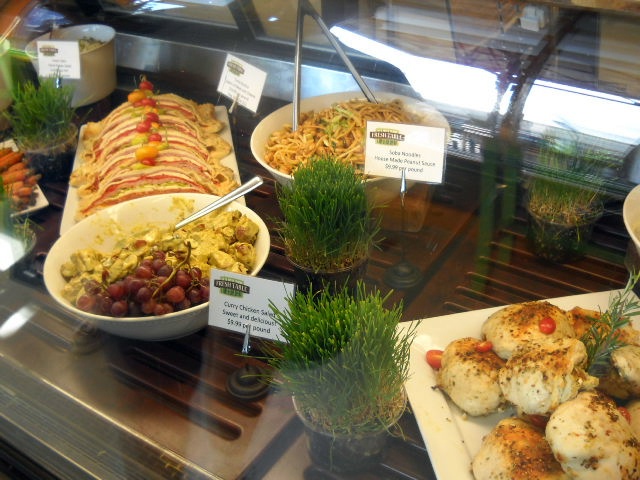 As much as Cindie and I love our old favorites at Findlay Market, we always seem to discover something new to us as well. This time we explored Skirtz + Johnson (in a store front across from Findlay's Market House on the south side). After seeing this window display, how could we not? 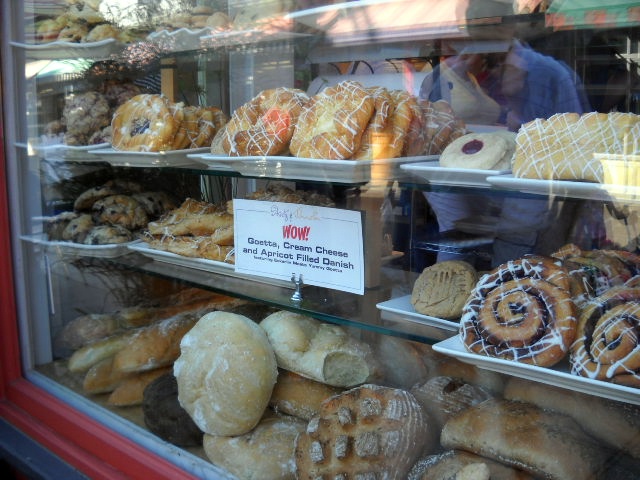 We treated ourselves to a couple of Skirtz + Johnson's lovely macarons on the spot. Cindie picked up a loaf of their salted rye from S+K's impressive bread selections for her father, and, powerless to resist a cannoli, I purchased their pistachio version after spying it in this dessert case inside. 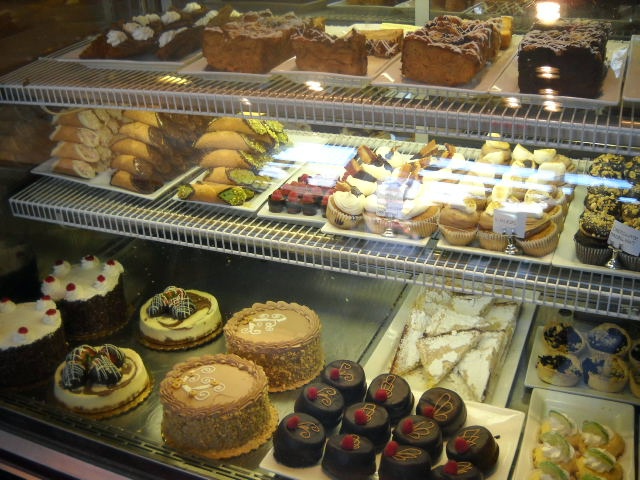 Skirtz + Johnson also offers breakfast and lunch (you can find a menu on their website), including a uniquely Cincinnati goetta danish, made with goetta from Eckerlin's, Cindie's new favorite goetta. 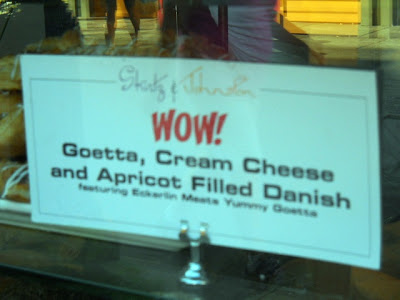 Eckerlin Meats is another of our must-stops at Findlay, in part because Cindie's dogs love their smoked bones. Cindie passes up no opportunity to spoil her dogs (and these captivate Oscar's attention  enough to actually keep him from barking). 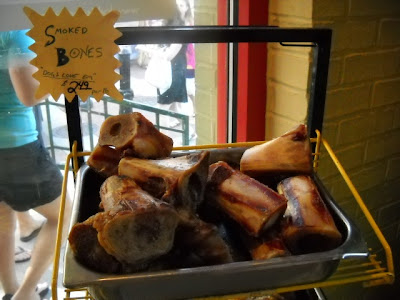 We were also on a quest for bacon for this month's Culinary Smackdown, and Eckerlin's was our go-to source. 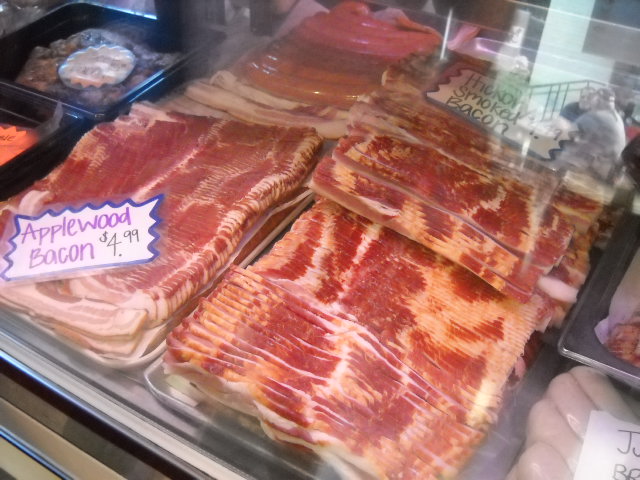 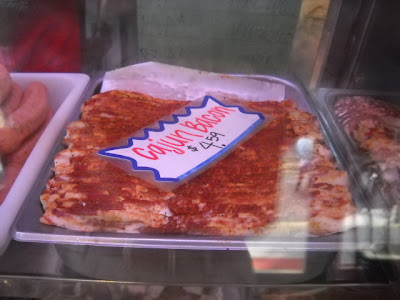 Knowing Cindie had a list with her, and would probably get carried away with additional purchases, I left her to her own devices at Eckerlin's while I headed to Dojo Gelato for some of their amazing Porkopolis gelato -  maple gelato mixed with candied bacon from another fine meat vendor at Findlay, Kroeger + Sons, thinking it would be a perfect way to kick off our Baconfest weekend. If you think that combo sounds odd, clearly you were not one of the people who caused Dojo to sell out of it between the time I finished in the Blue Oven line and went back an hour later. I had to console myself with memories of tasting it at Dojo's Hyde Park Farmers Market booth, and a cup of their Up in Smoke (made with a porter/ale?) and a hazelnut flavor with an Italian-sounding name I have sadly forgotten. However, it is difficult to stay sad long when tasting any of Dojo's flavors.

Thanks to all the great Findlay Market vendors I am happy to support with my local dollars, and stay tuned for more of my Battle Bacon adventures with Cindie later in the week. 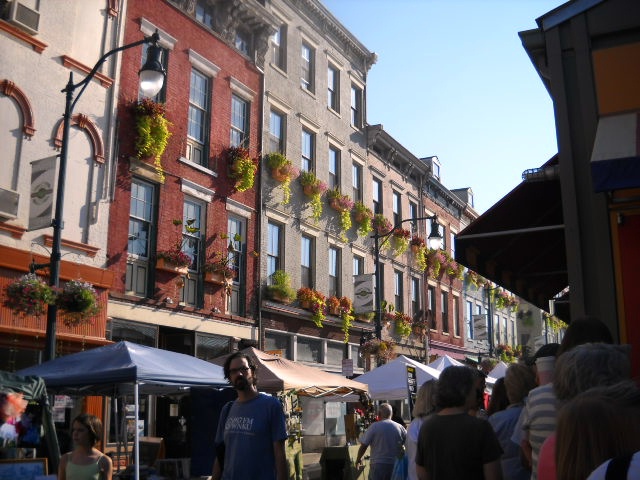 I could comment on a zillion thangs--but how cleveah the carrot display! An' wow--ya still have fresh veggies? ours is burnt up.

Man I need some smoked bones for the dogs. so many beautiful things to eat. I loved the cannoli stuffed green and the carrots and the yummy tarts. I was gonna do a bacon challenge. I was going to do a photo story on going to waffle house at 3 am to order a bacon waffle. but I would have to do it tonight to make deadline and i am already sleepy. zzzzzzzz

eggy. your photos are really good. and nice and big. makes the blog look great!!

MS, you have no idea how filling that day was - lol. Stay tuned.

Aunty, aren't those carrots gorgeous? Sorry to hear your veggies is burnt up. After our crazy wet spring up nawth here, our slow summer is finally yielding some craved-for abundance. You in for Battle Bacon?

Chicky, if I ever have the chance to meet you in person, I would love to hand-deliver some of those smoked bones to you and your brood. And thanks for your comment about my photos - coming from you that means a lot!

Grumpy Granny, our Culinary Smackdown host this month, is already up with her Battle Bacon post: http://grumpygranny.wordpress.com/2011/08/30/culinary-smackdown-battle-bacon-grumpys-reveal/

Back to working on my mine :)

Love this post and especially your last picture! Findlay Market is such a dangerous yet glorous place...I mean you could pretty much spend all day and all of your money (that's the dangerous part) there!

Funny side story: I beyond love Skirtz and Johnston, their bread, chocolates, and pastries so for valentines day my love decided to take me there to pick something out. Funny enough we came to find out that my love and one of the owners Andrew Johnston went to the same high school in Findley Ohio...small world.