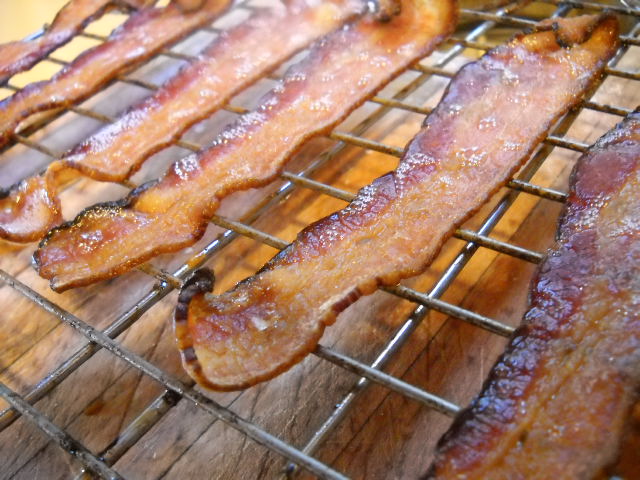 My friend Cindie’s mantra this summer has been the KISS (Keep It Simple, Stupid) principle. But sometimes we just can’t help ourselves.

When Grumpy Granny announced bacon as the theme for the August Culinary Smackdown, Cindie decided we should do a bacon tasting. Cindie selected three of local fave Eckerlin’s bacon varieties and had me make little signs for them, insisting my handwriting is better than hers (when you've been friends as many decades as we have, you learn to roll with it).

First up, the applewood-smoked bacon. 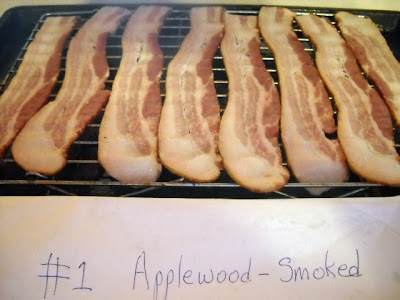 When it came out of the oven, Cindie tried to make the number “1” out of toothpicks. 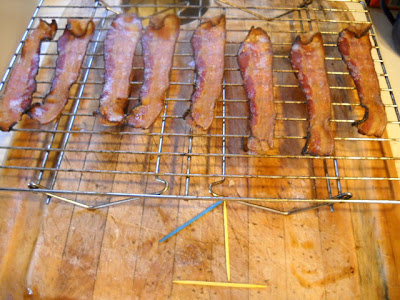 Next, the double-smoked bacon. 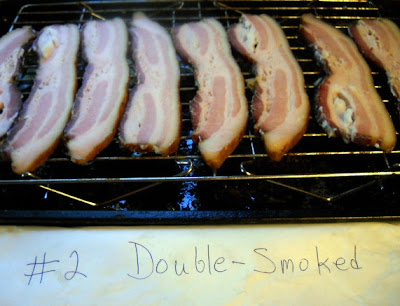 Aggravated with trying to make the number “2” out of toothpicks when it came out of the oven, Cindie resorted to a Roman numeral II out of basil stems. 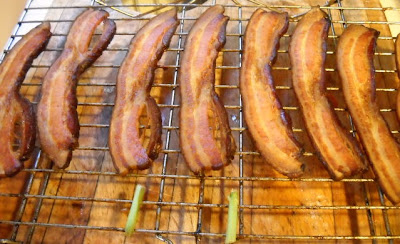 Here's the one we saved for #3, Eckerlin’s hickory-smoked bacon. 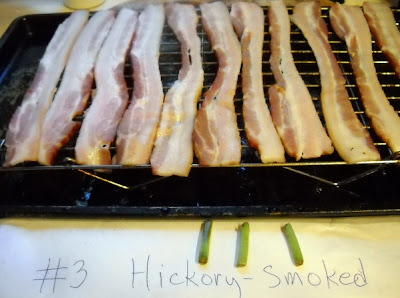 By the time it came out of the oven, I convinced Cindie to quit worrying about numerals. 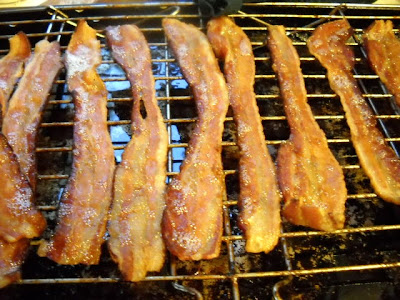 Results of our at-home taste test experiment? We both liked the way the bacon turned out baking it on a rack in the oven instead of frying it. Neither of us could pick up much apple or applewood taste in the bacon smoked that way, and thought it was saltiest of the three. We liked the double-smoked bacon better and it had a firmer texture to it (Cindie had also asked for it to be cut thicker). Our unanimous favorite was the hickory-smoked bacon. Which is what the guy who waited on Cindie on our previous trip to Eckerlin’s said was his personal favorite. Once again, it pays to ask vendors what they recommend.

Regardless of KISS, Cindie has made a pie or cobbler every time we’ve cooked together this summer. I peeled and cut the apples while she made the crust and a streusel topping she added later to this one. 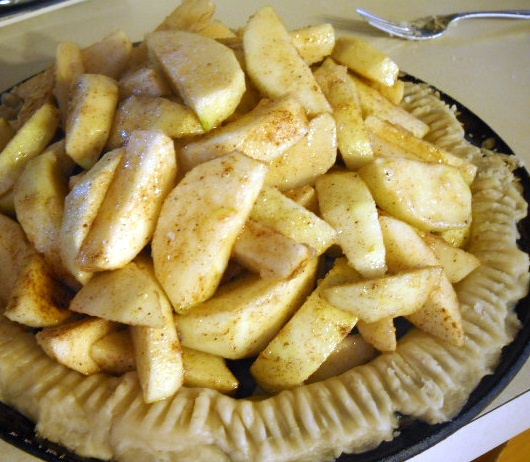 For hors d’oeuvres, Cindie had in mind to reprise my Rumaki recipe, which we made earlier this season: Marinated Chicken Livers and Water Chestnuts Wrapped in Bacon. Thinner works better than thick-cut bacon for this application, although I struggled with some (not from Eckerlin’s) that was so thin it frayed apart and was tricky to secure with a toothpick.

You can bake these puppies, but you’ll need to turn them. We found it easier to turn them and attend to even bacon cooking by frying them either on top of the stove or in an electric skillet. Look at Cindie’s tongs-wielding, rumaki-turning fingers fly! 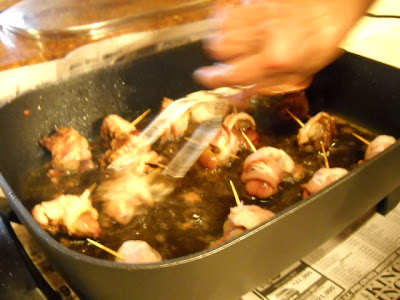 As another supposed appetizer, we opted for classically simple bacon-wrapped scallops. I kept warning Cindie both apps would be rich and filling and finally talked her down to only nine of these lovely 10-20 count sea scallops from Luken’s at Findlay Market (they have larger ones too – this one just looks as large as it does because I biggified one of my best photos from the weekend). 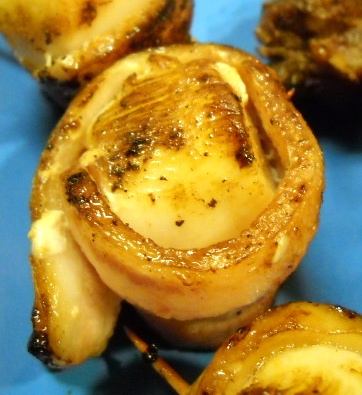 Yep, I was right. We ended up with 3 or 4 appetizer platters like these (minus the mayo dipping sauce, which was actually intended for our main course/Smackdown entry). Luckily a couple of Cindie's husband’s friends stopped by and helped eat them. 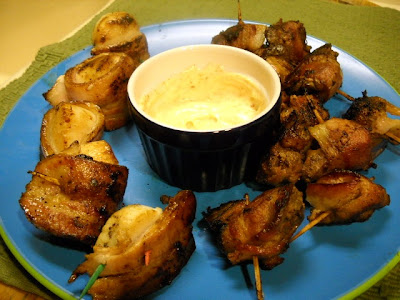 While the men ate and shot the breeze outside on the deck, Cindie and I were glued to Hurricane Irene coverage inside on the TV. Our rich “snacks,” not to mention our early morning at Findlay Market and an ample lunch on the way home, caught up with us. We were both too full to eat our Smackdown dish that night, or, alas, that pie.

But I was not going home Sunday without photos of our entry – or tasting it. So here’s what I had for breakfast, er, brunch.

A couple of toasted slices of Blue Oven bread: 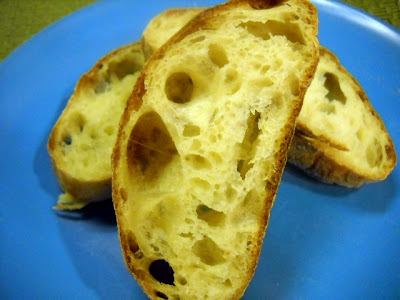 Some of these gorgeous red and yellow heirloom tomatoes Cindie picked at a friend’s: 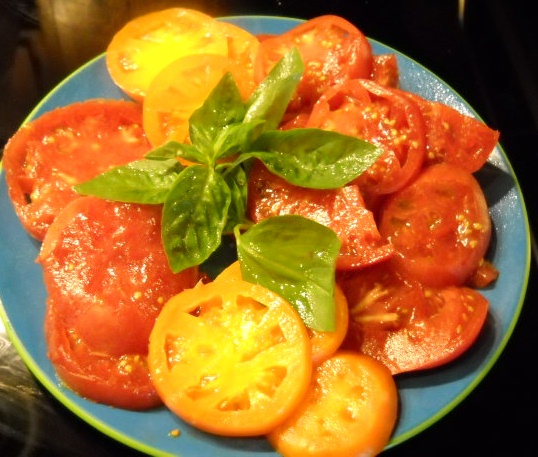 And, of course, bacon. Plus some Romaine and leaf lettuce we picked up Saturday morning from one of the farmers at Findlay (barely visible here). I tried fancifying it a bit with Pimente d’Espelette in the mayo (I failed to add enough to store-bought mayonnaise for it to be a noticeable difference), and adding some fresh basil. I love the summertime combination of fresh tomatoes and basil so much that its addition worked for me. 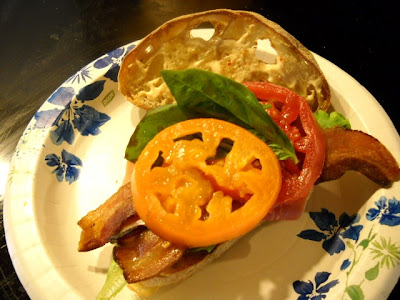 Verdict? No need to mess around with a BLT when you have perfectly ripe home-grown tomatoes. They were unquestionably the star of this sandwich, although the rest of it was pretty darn good too. And as much as I enjoyed the ciabatta-style Tortano loaf I purchased from Blue Oven, you get more surface area – aka more room for bacon – when you keep it old-school like Cindie’s husband Odie did with his. 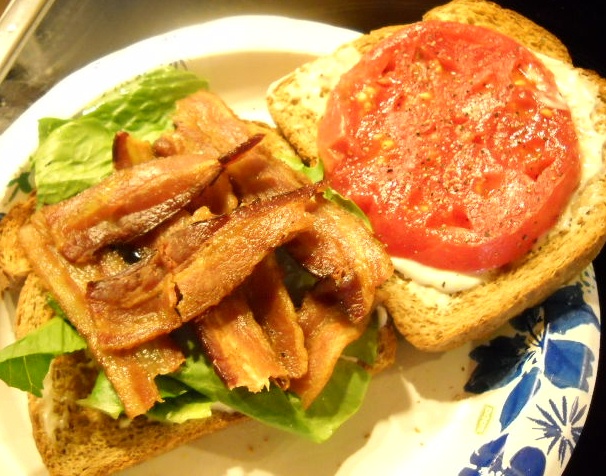 For much more innovative Battle Bacon entries, head on over to Grumpy Granny’s, where her own post as this month’s host (and last month’s winner) features a dish that will have you salivating (even if you’re vegetarian or have a sweet tooth) and you can find your way to the other Smackdown entries in the comments, which keep rolling in.

Ran out of time to participate this month? Got caught up in a hurricane frenzy or other real-world concerns? No problem. If you have power or are online in some fashion, you can still join in the fun and support the revival of this little thing we call the Culinary Smackdown by checking out the submissions, commenting if you choose, and staying tuned for where the Smackdown will go in September.
Posted by Sharon Rudd at 12:28 AM

Yes, Eggy, there is nothing like a great BLT, unless it's bacon-wrapped scallops or rumaki, which I adore. Fabulous entry and thanks so much for bringing the Smackdown back home!

So...what do you *really* marinate your chicken livers and water chestnuts in? :)

As usual, a gloriously comprehensive entry! Man, I haven't thought about Rumaki in years. I need to make some. Soon. Also, a BLT is nothing without a slathering of avocado. Just sayin' . . . Oh, and I can never tell if bacon is applewood smoked or not. I just know it all pretty much tastes really really really good.

Bacon and summer garden tomato's are one of God's or Nature's greatest gifts to the world. The great thing about Rumaki is it can satisfy that craving when it is not tomato season. Sharon & I need a bigger kitchen.....All posts look great!

Granny, you know I'm happy to bring the Smackdown back home - and grateful to you for hosting this month!

Minx, d'oh. That would be soy sauce mixed with sugar. Fixed now. Thanks for your excellent eye!

Moi, I don't know that I've ever had avocado on a BLT, but then I'm not from New Mexico :)

WaterDog, thanks again for cooking with me last weekend. Looking forward to more this weekend too!

Oh my Eggy, my mouth is watering! However aside from the salavating I have a few comments to make:

1. Having a bacon tasting with Eckerlin's bacon is such a good idea!
2. Making a beautiful BLT with that said bacon, some lovely tomatoes, and blue oven's bread...yum.
3. Now wouldn't Cindie's pie go well with a little bacon tossed in the strussel?
4. Your wrapped water chestnuts bring me back to childhood...my mother loved those!

Eggy, you and Cindi crack me up...who else but you would think of a bacon testing?! LOVE it. Ok, I have some comments and q's about your offerings:

When I make my tropical version of rumaki (almond and lychee with bacon) BAKED, I found the bacon shrunk and I had to double over a bit for the cooked bacon to meet all the way round, does that happen to you? (Also for my retro cocktail party I am making an updated version of rumaki using prosciutto instead of bacon! Stay tuned)

Also, did you fin the scallops to be overcooked? I thought that was a side effect of doing this dish, hard to get the bacon cooked without over cooking the scallop? They all looked REALLY good.

As for the BLT, I love this classic and only started eating it in the last few years as I always hated tomatoes. Now I love the crisp combo of crunchy bacon, iceberg lettuce, creamy mayo and salt! YUM! Well done for your efforts.

I have a fabu bacon recipe to contribute but not sure when I'll have time to make it....my sis is in from Michigan, weddings, restaurants and then back and forth to our new place to crack the whip on the contractors. sigh. Looking forward to a slower pace....xoxo

Stephie, I don't know if I could talk Cindie into adding bacon to her streusel, but I love the idea! And you hit on one of the reasons she went with an apple pie this time - apples are pork-friendly (the other reason was she's burned herself out on peach pies for the season).

Diva, love your twists on rumaki, and I will look forward to your fabu bacon recipe whenever you have the chance to post it. As for your questions:

I always make sure the strip of bacon I use is long enough to overlap the ends (I stick my toothpick through where they overlap). Is that what you mean?

I agree that one of the tricky things about bacon-wrapped scallops is getting the bacon done without overcooking the scallops. I find using thin bacon with large sea scallops improves my chances of not overcooking the scallops. Also I make sure the bacon (rather than the scallop) is in contact with the cooking surface, and continue to turn them so the bacon gets done all the way around the scallop. I find it's easier to attend to the constant turning process by cooking them on the stovetop or in an electric skillet rather than in the oven, which is why we went that route.

Hope you're having a grand time with your sis and that you're new place will be in shape soon!

Ahhhh....so that's how you make the scallops. I've tried them before in the past and only worked with the really huge diver scallops. Good to know all of the bacon tricks, thanks, Eggy!

I really want to participate in the bacon throwdown, have a recipe and everything...just not sure when, sis is in til Sunday night and have not had much time in the kitchen. I know you understand! Have a lovely holiday weekend, Eggy. xo