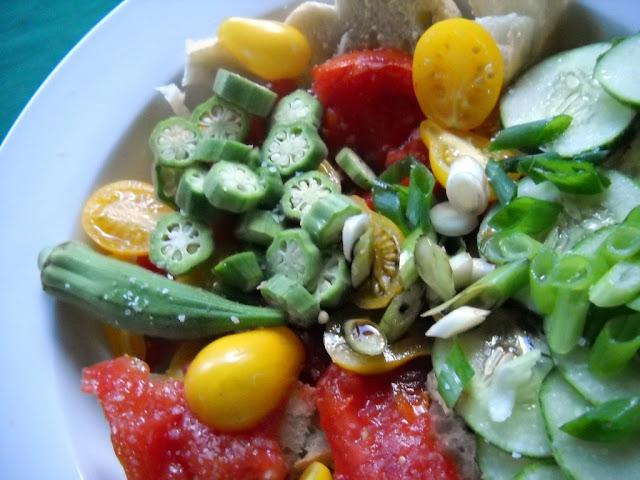 Here in the Intuitive Eggplant Kitchen, I love dishes that take well to adaptation, especially when they inspire me to come up with tasty uses for my overzealous farmers market purchases - or to stretch what I have on hand.

Panzanella is just such a dish. Dating back to 14th century Italy, it originated as a peasant dish to breathe life back into stale bread. More recently it has spawned year-round adaptations - even a dessert or brunch twist or two. I love it when my creative juices are sparked by chefs, bloggers, and quirky home cooks like myself sharing their own innovations. You'll find a round-up of wide-ranging panzanella recipes later in this post. But let's start with the fresh summer version I made this week.

First you start with some bread. I had more than enough on hand in anticipation of upcoming Battle Sandwich. 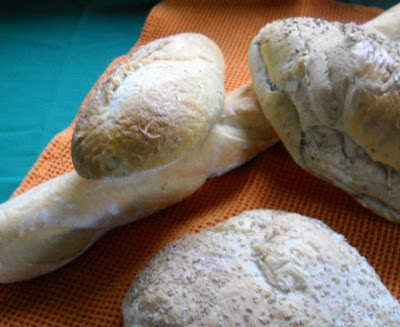 In particular, I needed to use this lovely baguette from Jean-Paul's Paradiso, which started to do its authentic baguette thing and dry on me before I could make my way through my bonanza o' bread. 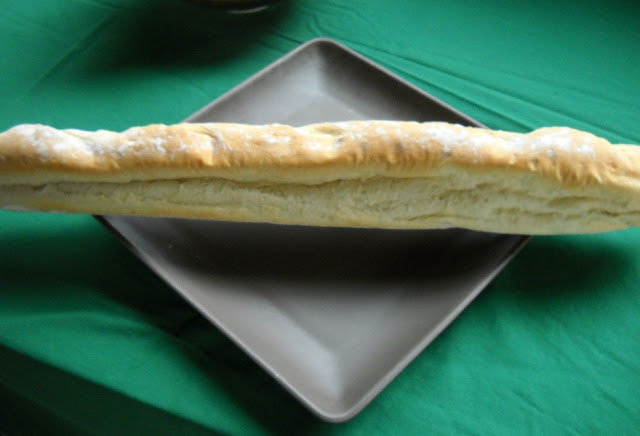 It was "panzanella perfect" when I broke it down like this. 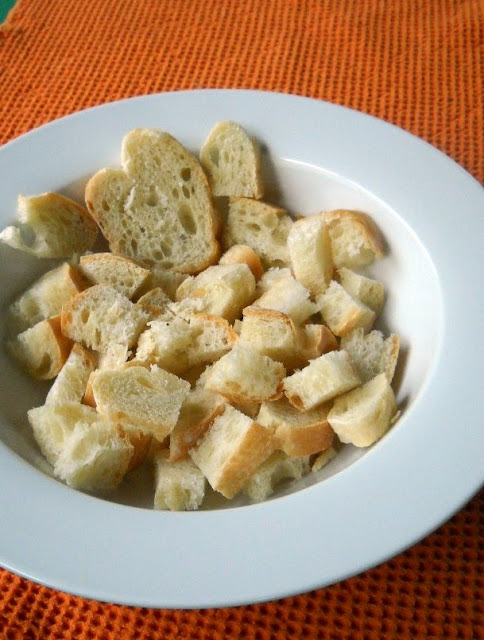 For a classic Italian summer panzanella, you need tomatoes, and I had a superlatively juicy large red one that needed to be used, as well as sweet yellow pears at their ripe peak. 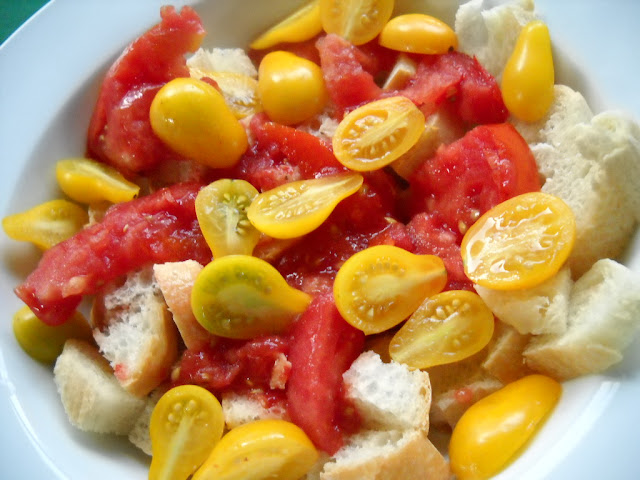 Although some panzanella recipes suggest hydrating your bread with a vinaigrette, I opted to add as much juice as possible from my overly ripe red tomato, holding off on the dressing until after I'd added more veggies to my bowl.

First, I added sliced raw okra. If you'll indulge me in a quick okra detour, I must confess that I've never purchased or attempted to cook with fresh okra before. But after eating fried okra from Andouille Restaurant's back-yard garden recently, I couldn't resist the chance to do something with okra myself when I found mounds of it at a farmers market. When you can find okra this fresh, there's no slime factor whatsoever (a perceived deterrent some of you commented on). I tasted a few slices to see how okra tastes raw, and sold myself on the idea of leaving it that way, without sidetracking myself with further research about how to prepare this lovely veg. 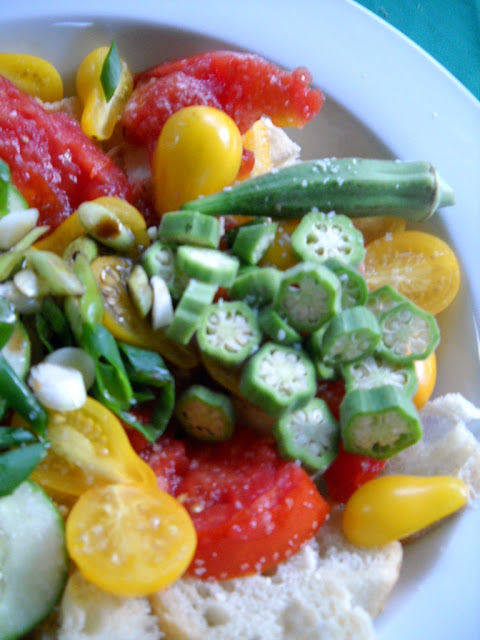 Next I added farmers-market-fresh cucumbers and some green onions I bought as an after-thought at the supermarket. Thinly sliced red onions, shallot, and/or garlic would be excellent substitutions or additions. 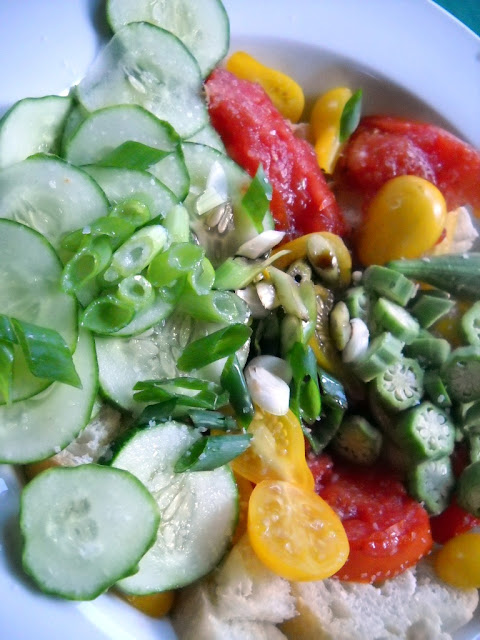 I drizzled my summertime salad with olive oil and added splashes of both sherry vinegar and balsamic, since at first I inadvertently picked up the balsamic when I thought I had the olive oil. Both vinegars marry well with the fresh veggies in this salad. I'm just glad I remembered to hold my index finger over the top of the bottle to slowly dribble out its contents - the better to catch my "mistake" and to keep from overdressing my dinner. 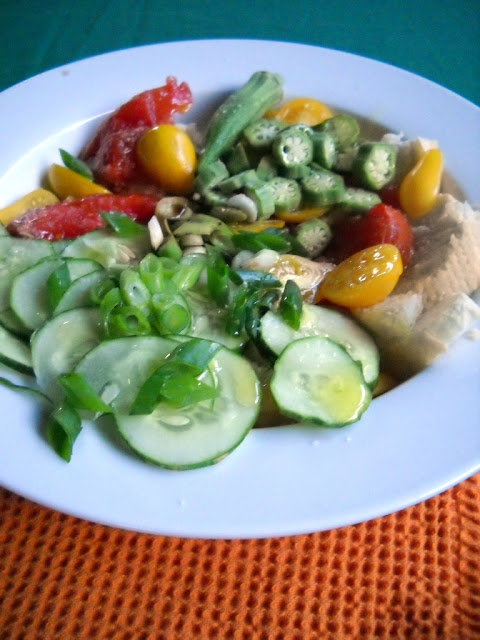 Fresh basil may be the classic summer panzanella herb, but thyme or rosemary work too. Go with what you have on hand. Trying to photograph in natural light on my porch before the sun got too low, I skipped the tedious process of stripping fresh thyme leaves from their stalks and just tossed in some dried thyme and a little salt and pepper. Darn, the days are getting shorter.

To finish my salad, I topped it with some roasted red pepper, parmesan, and kalamata olives. 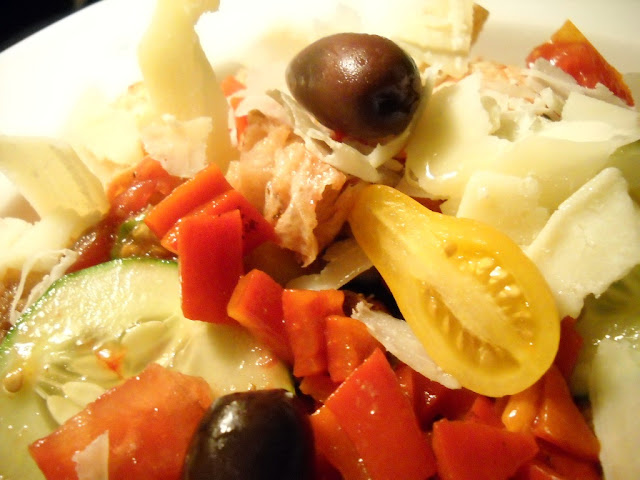 Summer in a bowl! But you can also adapt this dish to highlight the flavors of fall, winter, or spring. On to my panzanella recipe round-up.

Ina Garten takes summer panzanella in a Greek direction with this recipe featuring feta, lemon, and olives. She also offers a grilled panzanella and goes with capers, bell peppers, and cucumbers here.

Alton Brown adds bacon for a BLT twist in this recipe.

For autumn, you could use butternut squash, cauliflower, and Asian pear as in this recipe. Or sweet potatoes and pumpkin seeds as in this one.

For a panzanella version of Thanksgiving dressing, you could try mushrooms, celery root, lentils, and turkey stock, as in this Bill Telepan recipe (on page 13, from Martha Stewart).

Smitten Kitchen makes a winter panzanella with butternut squash, sage, and brussels sprouts here. Or you could use beets, pancetta, and goat cheese as this blogger did, based on a Tyler Florence recipe. Blogger Sippity Sup takes things in a Nicoise direction with this winter panzanella of cranberry beans, white beans, green beans, and tuna.

Taking panzanella in a sweeter direction, this Guy Fieri recipe includes strawberries, onions, tomatoes, and blue cheese. At first I thought that sounded like an odd mash-up of flavors, but then I remembered the classic Italian salad of berries (raspberries, blueberries, blackberries, strawberries - take your pick), balsamic, basil, and blue cheese. If you've never tried it before, you should. You won't believe how well balsamic complements the berries.

So what panzanella adaptations do all these variations bring to mind for you? What about using panzanella to stuff tomatoes or portabello mushrooms? It occurs to me I could do a sausage panzanella based on that Alsatian salad of marinated sausage and gruyere I made for the Picnic Culinary Smackdown and added rye croutons to. I'd love to hear your ideas. And don't forget that panzanella isn't just for summer. Because, darn it, the days are getting shorter and the season will be over before we know it.
Posted by Sharon Rudd at 10:15 AM

Heff LOVES Okra, but I AM getting tired of her talk-show !

Fantastic panzanella recipe. Loved the addition of the okra. Too many people thumb their noses at okra. Bravo!

I do love the classic panzanella, but the bacon sounds like a good addition, and maybe some bleu cheese....yummmmm

Heff, yep, I'll be up Monday for the Smackdown. Can't wait to see everyone's sandwiches!

Lazaro, thanks for sharing my okra love. Always appreciate getting a thumbs-up from you, my friend!

I love panzanella salad. There's nothing better in summer and I like your okra addition.

Good luck in battle sandwich. You've got some great looking bread there.
Sam

Thank you!! NOW I know what to do with the Cuban bread I made in anticipation of the smackdown but decided not to use. PERFECT. Tomatoes are just coming on here, and I picked a foot-long cucumber this week. Perhaps some roasted eggplant would go in as well and we have a couple of hot cherry peppers, too. I wish I could grow okra here--tried once and got a few pods but the hot weather doesn't last long enough to get much. How does it taste raw? Thanks for the inspiration!

Looks great - I too tend to be a bit overzealous in my farmers market purchases!! So this is a good use for all that bounty. You know, I found purple okra a while back, and it has so very little slime compared to green. If you see some, grab it - anything purple is automatically fun, right?

Thanks for the panzanella round-up...it is inspiring to hear about so many different ways to prepare that dish! Years ago, I used to make a Moroccan Bread salad, with lots of cumin, celery, and a little cheese. I will have to dig that one up again!

Wow - awesome post! I like the idea of the bread taking a lead role. That's a new one to me and I plan to use it. Where I live bread doesn't really dry out, because the climate is so humid. But I can toast it and then proceed.

I've never made a panzanella...but I haven't seen one with okra either. What an interesting addition :)

There is nothing like a good panzanella, especially with the produce being so good right now! Awesome post.

I saw this a day or two ago. I guess I forgot to comment (I can be so stealth!), but I wanted to say thanks for linking to my version of this classic recipe, your is gorgeous. So I am proud to be in such good company. GREG