POSITIVELY TUESDAY: FROM THE DEPARTMENT OF YOU CAN'T MAKE THIS STUFF UP

A few of you asked whether that building shaped like a picnic basket I featured a couple of weeks ago was for real. Yes, it is, located in Newark, Ohio, and home of the Longaberger Basket Co. I have no Photoshop skills, nor could I think this up on my own. Here's an aerial photo of the real deal: 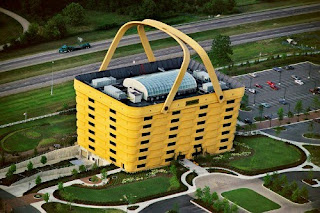 Meanwhile, one of our recent lightning storms smote what was possibly the most enormous and garish Jesus statue in existence (known around these parts as "Touchdown Jesus"). You couldn't miss him driving up I-75 between Cincinnati and Dayton. That's TJ on the left, and the remaining steel structure on the right. 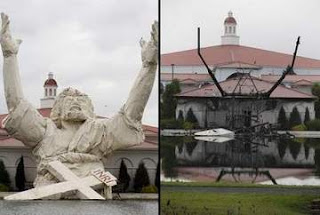 I shook my head when I heard the church was committed to rebuilding the sculpture at a cost of something like $700,000. Surely that kind of cash could be put to better use to help people, causes, or clean-ups that really need it?

But I was truly taken aback when I read that PETA offered to provide the church money to rebuild the gigantic statue in the form of a Jesus with a lamb in his arms and an inscription that reads: "Blessed Are the Merciful. Go Vegan" (I shudder to think how large a font would be required to make that message visible from I-75.)

PETA's letter of offer said, "As thanks for working with us to spread this lifesaving message, we will also send your congregation free copies of our 'Christianity and Vegetarianism' pamphlets, vegetarian/vegan starter kits and children's stickers showing a baby chick declaring, 'Jesus loves me too!'"

Yikes, Eggy happily enjoys and prepares many vegetarian and vegan dishes. But forcing extremist views down anyone's, er, throat, not so much.

It makes me sad when the city where I've lived so many years, and which has many admirable arts and culinary traditions, plus increasing revitalization, makes the national news for things that make us look like a hick town, or worse, and apparently TJ has made the national news. (I'll redact what I was going to say about some of our former embarrassments.) 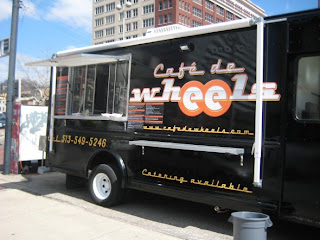 Nonetheless, I am hopeful about a couple of new developments. It looks like food trucks might officially be allowed soon, at least at specified locations. (Cincinnati has only about 3-4 food trucks so far, but as soon as these entrepreneurs appeared on the scene, regulators got hot and bothered about regulating them.) For goodness sakes, we have a Purple People Bridge, why not have food trucks to feed the people on the bridge and elsewhere? 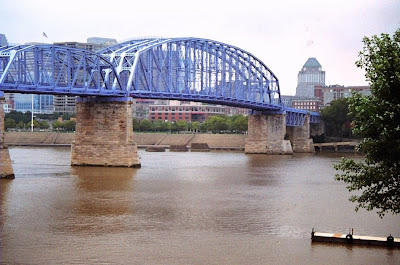 Another upcoming effort really makes me smile: An installation of painted pianos throughout Greater Cincinnati and Northern Kentucky "on streets, in public squares and parks, and at other fun locations – for anyone to discover and play" and in conjunction with Cincinnati Public Radio. Called "Play Me, I'm Yours," this is something that apparently has been done in London, NYC, Sao Paolo, and Sydney (paging Diva!). Here's a clip:

I guess they're looking for old pianos to be donated, have artists in place to paint them, and are looking for people to be watchdogs over these pianos in public places. (Hmmm, how could I phrase doing something like that on my resume?) I love the idea of this kind of interactive art. Just can't imagine what the heat, humidity, and rain may do to them. Many people may have old and out-of-tune pianos taking up space and happy to donate to the cause. My mom would not be one of them, although I would love to get her to Cincy during this event and cajole her into playing out in the fresh air!

To get off my soapbox and share something truly goofy . . . from Nebraska, the state where I was born, here is Car Henge (yep, I'm not making this up either): 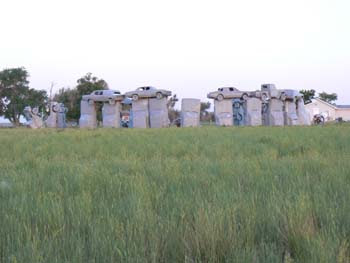 Car Henge is a bizarre midwestern tribute to Stone Henge (you know, that one in England, where pagans/Druids hung out and worshipped the Sky and the Sun and the Solstice). This one is made of abandoned cars. I can't think of Stone Henge without thinking of Spinal Tap (back during my early manuscript-wrangling days in NYC, I had the odd privilege of getting tickets to film previews via the magazine I worked for; no one anticipated this movie!).

To wish you all a belated happy Summer Solstice, here's a clip that I hope you makes your outlook on the week go up to an "11" - which is always "one better than," isn't it?


Check back for my announcement of July Culinary Smackdown. I promise it's coming soon.
Posted by Sharon Rudd at 10:52 PM

wow-- I had the best-est time readin' this!

Purple people bridge? Hilarious, CarHenge? What imagination? (What will the aliens think of our culture???) A basketbuilding? Hilarious-- of what are the handles made? And the pianos!! notice how them menfolk is the best / most players in that clip?

The TJ gits me though --an anyway, I though TJ was jes' at U Notre Dame. Fie on PETA.

Glad I could give you a laugh, Aunty. With the day I'm already having, I need one too :)

Wonderfully written. Never been here before but am expanding my blog base past the usual. Liked the place."Vegan Jesus", thats good stuff. I guess they missed the part in the bible about the loaves and the fishes.

Did PETA miss the sermon on loaves and fishes? It wasn't loaves and tofu...

MRM, glad you stopped by! You are most welcome here anytime!

I just saw the basket building on FoodNetwork's Unwrapped a couple of days ago. I remember thinking - what if they go out of business and have to sell the building? Car Henge is pretty cool. I've seen a whole series of pictures on it.

I'm sure the church will get enough donations that they won't need PETA and all of their trappings. I just hope they don't come by later and throw blood on Touchdown Jesus.

Actually, Buzz, when surfing for a photo of the basket building, I came across one from a realtor's site, so don't know what's up with that.

I also read the church turned down PETA's offer, and yes, I believe they're getting lots of donations.

Can't believe no one has commented on the Spinal Tap clip. Hmmm. Perhaps it's a good thing I don't participate in Movie Clip Wednesdays. Y'all are much more versed in movies that I am, but this is one of my faves. Heck, I have no idea what sort of MCM theme it could possibly fit into.

Anyway, thanks all for stopping by. Details of next Smackdown have finally been nailed down with Team Eggplant, and I expect to get the announcement post up tomorrow night. Really. Now off to watch Top Chef . . .

Ok, I'll comment on Spinal Tap! LOVE this movie, I forgot about this song! My husband could re-tell you the entire movie, all the songs and what they mean. I think it's a guy thing. "you start screaming like a bunch of poncy hairdressers!" I might have to use that...thanks for the giggle!

You know what I love about the piano thang? anyone can play it and no one is getting asked to stop or get off. Whenever I see a piano, I always play. And usually get kicked off (even if I am playing good!)

I loathe Peta. I used to be a member in the 80's but then I got mail from them saying how "one day, we'll live in a world where pigeons are NOT chased off a square or statue and blah, blah, blah" I knew it was time to quit them and stay away, far away. I loathe pigeons. I am a bad, bad human.

Oh god. Best post evah. This thing was all over the place. Hahahaha