Wine Wednesdays at Mayberry: A Steal of a Deal 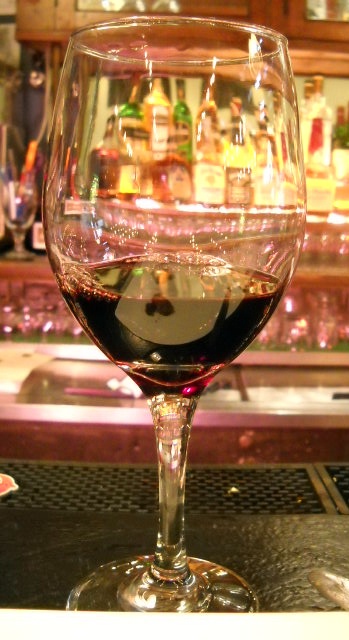 It was a dark and stormy night.

Wait. It was a Wednesday afternoon that just looked like night when storms blew through.

There are many things I love about working in downtown Cincinnati. But it gets creepy when you look out from the 20th floor of your office building on Fountain Square and can't see Kentucky.

Or across 5th Street

Co-workers receive messages that power is out at home. You know traffic will be a mess no matter what direction you're traveling in. What to do?

I stuck with Plan A, which was to check out Mayberry's every-other-Wednesday 5:30-7:30 happy hour deal featuring four bites and four pours of wine for a remarkable $10. I'd stopped by the previous week, thinking I was on the "every" rather than the "other" Wednesday and learned they'd skipped a week due to July 4th and anticipated Choir Games traffic that never materialized. Chef Josh Campbell said he'd be starting Wine Wednesdays up again the following week, and I assured him I'd be back.

So glad I didn't let that storm sway me from my resolve. The wines featured that particular evening were Spanish, and paired with generous portions of tapas-style components from dishes on the newly tweaked Mayberry dinner menu.

Like this wedge of Manchego from the artisan cheese board. 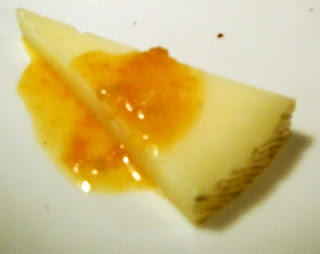 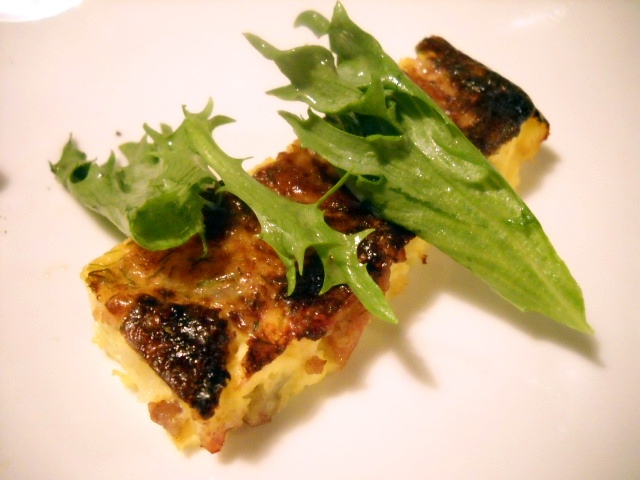 And this bacon-wrapped date, from the "Snacks and Salads" section of the restaurant's menu. 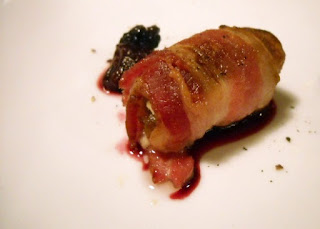 A chocolate dessert was the fourth "bite," all four served on the same plate. The short pours of wine (after all, this whole she-bang is just $10) are poured sequentially. Mayberry's wine guy was on hand to provide helpful explanations if you, like me, don't pretend to be a wine guru and are curious to learn more. I really enjoyed the food and wine pairings, and I'm eager to return. 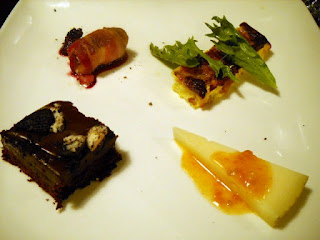 Each "every-other-Wednesday" will feature a new combination of bites and wine flights. The pairings for this coming Wednesday (Aug. 1) have been announced: Melini Orvieto with Asparagus and Ham, Grooner Zweigelt and a Blue Cheese Fritter, Villa Pozzi Nero D'Avola with a Beef Tartar Crustini, and Pacific Rim Framboise with Chocolate Goodness.

If weather cooperates, the outdoor courtyard behind Mayberry is a hidden oasis, as I discovered when I took my parents to brunch there in June. (The food, service, and lack of wait lines were the perfect prelude for showing off the changes in OTR to my 'rents, including a visit to the relocated Art Academy, where my father once taught.) When the weather is less kind, Mayberry can also crank up the AC in its new and spacious interior space (across from Japp's on Main).

I will definitely be back, although I may need to set aside a separate evening for a full-on dinner. Mayberry's Wine Wednesdays are a very satisfying series of bites (from app to dessert), at a ridiculously affordable price.
Posted by Sharon Rudd at 11:25 PM

Wait, you only had one order? Green Tomato Carpaccio is something I've never heard of. I'll bet you're looking forward to the next bad weather report.

Yep, that was one order, including 4 pours of wine, for $10! I'm curious about that Green Tomato Carpaccio too, and more on the menu. I won't wait for inclement weather to go back :)