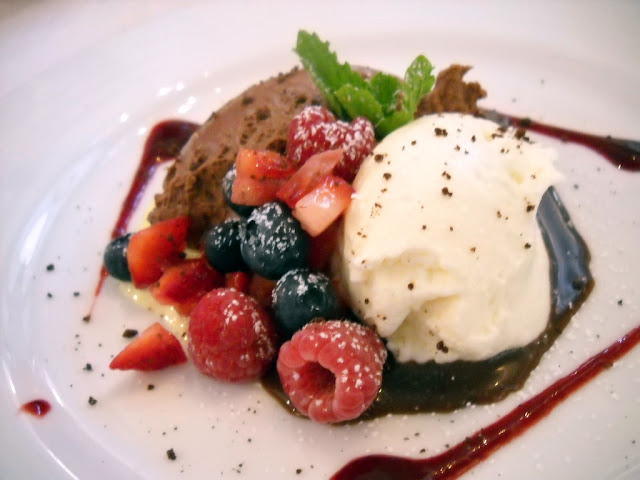 Some say laughter is the best medicine. I say, sometimes indulgence is better medicine. With friend Cindie healing after a painful medical procedure and, I’m sorry to hear, other blogger friends dealing with their own ailments, it’s high time to post about one of the very best meals Cindie and I shared in the last few months – lunch at Jean-Robert’s Table.

J-R’s Table serves lunch Monday through Friday, but, alas for our mutual schedules, not usually on weekends. Happily, the restaurant expanded to weekend lunch service in December (and offered Valentine’s lunch as well). Our holiday gift to ourselves was a mid-day meal one pre-Christmas Saturday after a trip to Findlay Market and Avril’s.

Although Cindie and I elected to work our way through a number of courses, any one of them would have made a satisfying weekday lunch. Prices are much more affordable than the Maisonette and Pigall’s, two of chef Jean-Robert de Cavel’s award-winning former restaurants, and the menu includes casual fare such as burgers and sandwiches. While Jean-Robert has chosen a less fine-dining concept for his newest venture, my take is that he has not relinquished his standards for the quality and care that go into both food and service. He’s simply adapted them to a lower price point and a more approachable format.

In other words, you don’t need to consider Jean-Robert’s Table a special-occasion restaurant. Although we were happy to. And we weren’t the only ones. An impeccably dressed three-generation family was seated at a prime corner booth for their pre-Nutcracker Ballet meal. I could easily imagine the presiding grand-mere had, once upon a time, been treated to a similar outing at the Maisonette when she was the age of her granddaughters. 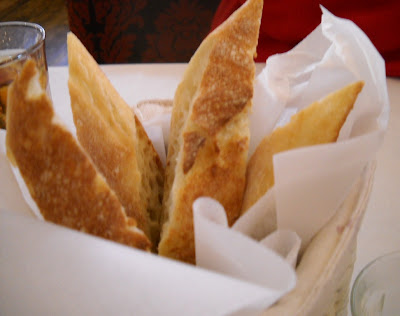 I wanted to go straight for the house charcuterie plate and was disappointed to learn none was to be had after a large party the prior night had wiped them out. So Cindie and I decided to warm up with soups, and contemplate our next move. Our delightful, low-key young server was happy to let us select courses out of order, knowledgeable in answering our questions, and also managed to get the music turned down after Cindie complained about the volume.

Either of our soups would have been a great lunch in itself. The portions were large and satisfying. Cindie ordered the “classic” French onion soup, and classic it was – piping hot, with a crust of melted cheese overlaying a serious crouton, and thick, caramelized oniony goodness underneath. 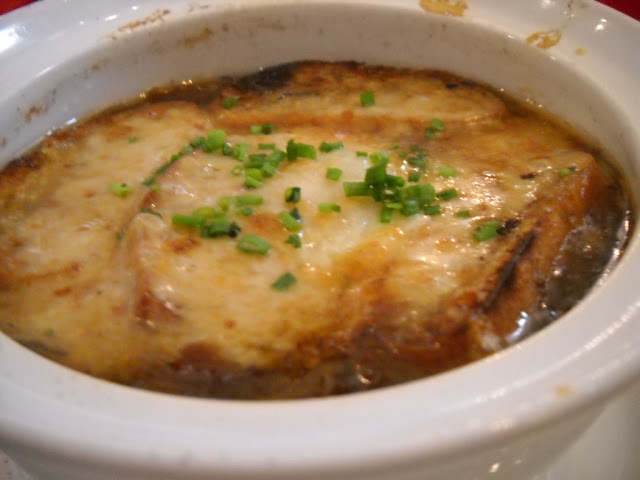 I chose the French Country Style Soup, rich and hearty with white beans and duck confit. I loved the well developed flavors, although it would have been even better had it been hotter. 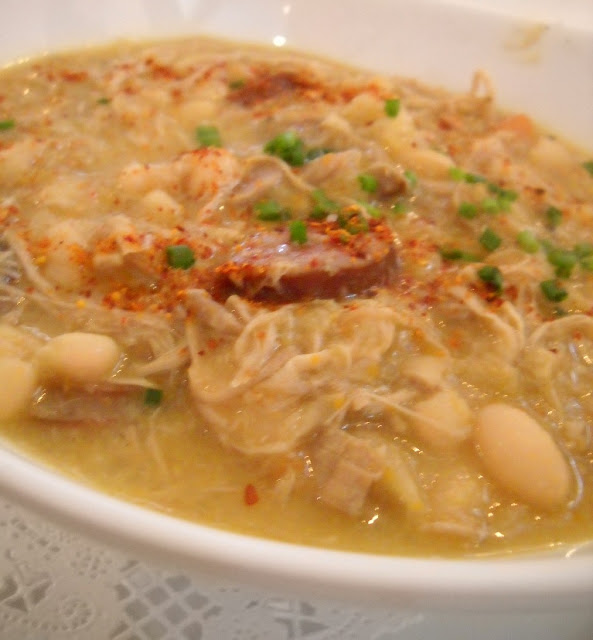 Next, we shared an appetizer and a salad. We both loved the beef tartare with cucumber, radish and avocado – succulent and well-seasoned. 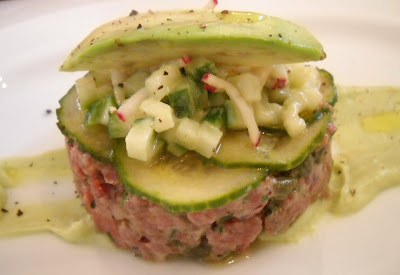 Our salad, the Goat Cheese “In Brick”, was another dish large enough to be a meal on its own. We were curious to try the “In Brick” preparation, which turned out to be tangy goat cheese enveloped in phyllo-like triangles that paired beautifully with the apples. We thought the accompanying endive and romaine could have benefited from a tad more cider dressing, but definitely enjoyed it. 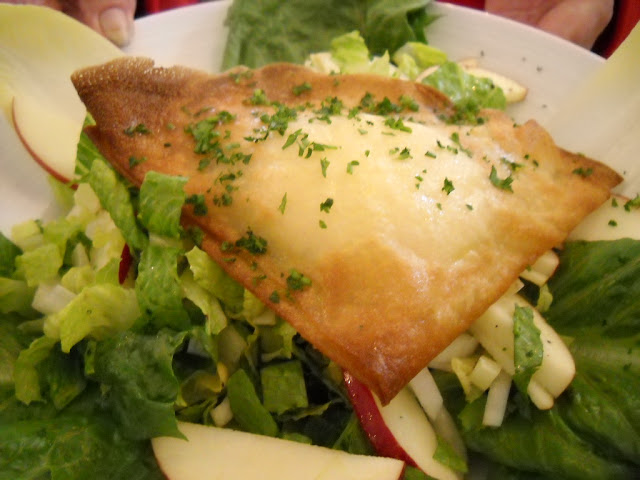 While we could have stopped there, we had no intention of doing so, eager to try the lunch versions of two entrees that also appear on the dinner menu. Cindie ordered seafood crepes with Bechamel and mushrooms over spinach – rich but delicious (and heavier on salmon than other seafood for the lunch portion, as befits the lunch price point). 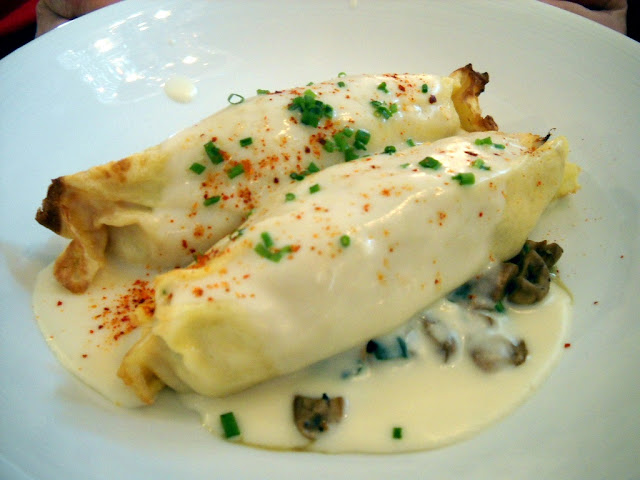 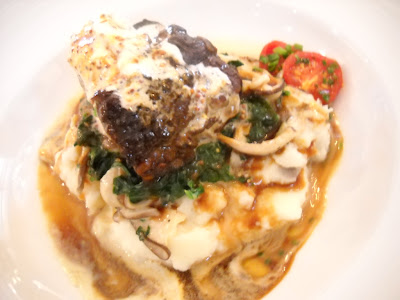 We had arrived before noon and by this time it was after 3:00. Acknowledging we couldn’t possibly finish our entrees after everything else we’d eaten, we asked for to-go boxes. But our lunch of indulgence wasn't over yet.

We settled on one dessert to share, because, well, how could we let this meal go without one? When presented with the possibility of white and chocolate mousses accompanied by white and chocolate ganache and fresh berries, who in their right mind says no? 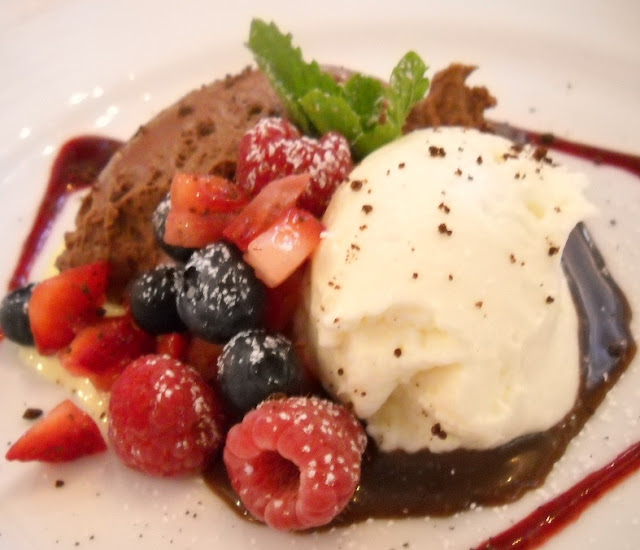 With the addition of some libations we wouldn't indulge in for a work-week lunch (two glasses of wine for me, a Grand Marnier for Cindie), our bill came to $105 - no doubt less than if we had ordered this extravagantly during dinner service. But you could easily have a satisfying lunch at J-R's Table for $15 or less. I think a lot of Cincinnatians continue to regard any opportunity to taste Jean-Robert's food as a treat - and rightly so. If he opened a food truck tomorrow, I'm confident it would serve exceptional fare. I don't think this chef has it in him to compromise when it comes to putting out memorably flavorful food. Happily, we can taste it Jean-Robert's Table without waiting for a special occasion.

Meanwhile, thanks to those of you who were concerned about my not posting in a while (just busy on other fronts, kids). Sending out best (and healing) wishes to all my blogger friends, as well as Cindie, who is recovering from toenail-removal surgery. With luck and the creeks don't rise (a worry after heavy rains here this week), Cindie and I will be back to our foodie adventures with a trip to Louisville in a couple of weeks. Cross your fingers and tablespoons for us, because we're both more than ready to get out of dodge!

now this is what has been missing; Eggy and Food! Great photos, great write up and I hope your upcoming trip yields some great food finds for you and your friends.

Those berries and ice cream are really, really making me wish it was summer around here.

Missed you Eggy! Good to see you and Cindie out having the best adventures.

That is a lot of food for lunch. Not for me, of course, but that's a lot of food. I particularly liked the looks of the beef tartare and the onion soup. I love tartares and carpaccios but don't see them on many menus. I guess because they're labor intensive and not everyone likes raw meat - their loss. Nice adventure.

See, this is what I like about you gals: hearty appetites! And your photos and descriptions made me nearly pass out. I can't wait until I'm back in the saddle to both cook and eat. In the meantime, I'll just keep coming back to this post.

So, Cindie must be booted, too? Please give her my best for a full and speedy recovery.

Boxer, glad you enjoyed, and thanks for the good wishes for our upcoming trip!

Buzz, I'm with you all the way on tartares and carpaccio!

Moi, we don't eat like this everyday, but sometimes one has to seize opportunity! Yes, Cindie is das booted - I will pass along your good wishes. Thanks!

Mah knees is weak! What an amazin' "lunch", uh, yeah, shure. Thas a feast! Fit fer royalty. This chef is some fella.

Eggy, yore photos be first rate. Ya should be real proud of 'em.

That Country French Soup--white beans,duck confit--near 'bout Cassoulet, ain't it? Once, in Pamplona, I had some Basque version --"Alubias Navarre" an' I ain't had beans that good since.

Get well wished to Cindie, an' be shure to pack yore camera when y'all head to loiusville.

Good to have you posting again.

Wow! How wise of you to go to this restaurant for lunch instead of dinner! I bet you saved a bundle but it does not look like you missed out on anything! The bar bill for me and the DJ does tend to climb at special occasion dinners but I doubt I'd drink that much at lunch either. (wait. I'm lying. I've just recalled long, boozy lunches from my past life in Australia! ha! Good thing you gals can show a bit of restraint!) What a fabu day, glad to see you two treating yourselves! Hope Cindi feels better soon.

good heavens! i'm always starved when i come here.
but anyway, the theme for this haiku monday is pulchritude. hope you can come and play.

Wow what a great indulgence and how fun to spend the afternoon with a friend. Everything looks fantastic and sounds like a wonderful place :)

first: i had to look up charcuterie. this blog is entertaining and educational! The french onion soup looked great - i love it when its done correctly. And the goat cheese and phyllo sounds wonderful too. very late afternoon snack. a 105 bill for that exquisite meal was a deal. and money well spent.
a rare off afternoon with a friend and great food? priceless.